Team Pure and Wild leans on grit, preparation and luck to win 2022 Race to Alaska 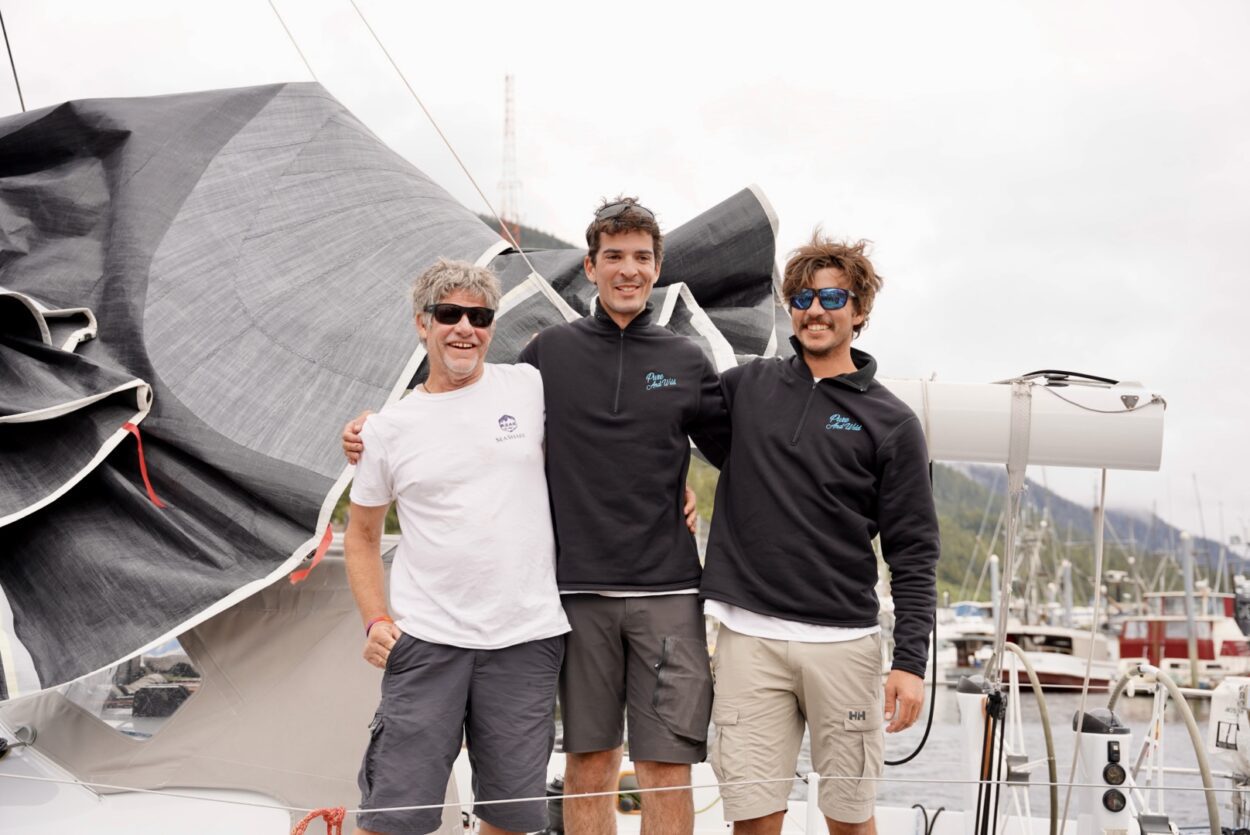 From left, Jonathan McKee, Alyosha Strum-Palerm and Matt Pistay pose for a photo aboard their 44-foot sailboat Dark Star after winning the 2022 Race to Alaska under the name Team Pure and Wild. (Eric Stone/KRBD)

Team Pure and Wild has won the 2022 Race to Alaska. The three-man crew from Seattle aboard a 44-foot Riptide monohull sailed into Ketchikan’s Thomas Basin harbor Monday afternoon.

It was not close.

“I mean, they’re days in front of anyone else,” said Jake Beattie, the head of the Northwest Maritime Center, which organizes the 750-mile non-motorized, self-supported Race to Alaska. He says from the start, he knew there were two teams likely to stand out in the race: Pure and Wild and Malolo.

They took different routes. Pure and Wild turned right coming out of Victoria, British Columbia, sailing up the west coast of Vancouver Island in the Pacific Ocean. Malolo turned left, going up the traditional inside route east of the island. And that made the difference.

“The other one ended up hitting a log — like, a catastrophic log failure, essentially, on the back side of Vancouver Island,” Beattie said. “So for days, it’s been these guys’ race to either win or lose, and it looks like they’re gonna win.”

Among the couple dozen spectators gathered to watch the victors arrive is Libby Johnson McKee, the wife of Pure and Wild captain Jonathan McKee.

“I made the decision last night around 11 to get a plane ticket and come up here for the finish just to surprise my husband and to just be here as part of his triumph,” she said.

She says she’s been following the race closely.

“I have spent countless hours on Facebook, on Instagram and on the tracker, and I’ve gotten very little done over the last few days. I haven’t been able to tear myself away — 11 o’clock at night, still checking the tracker,” she said. 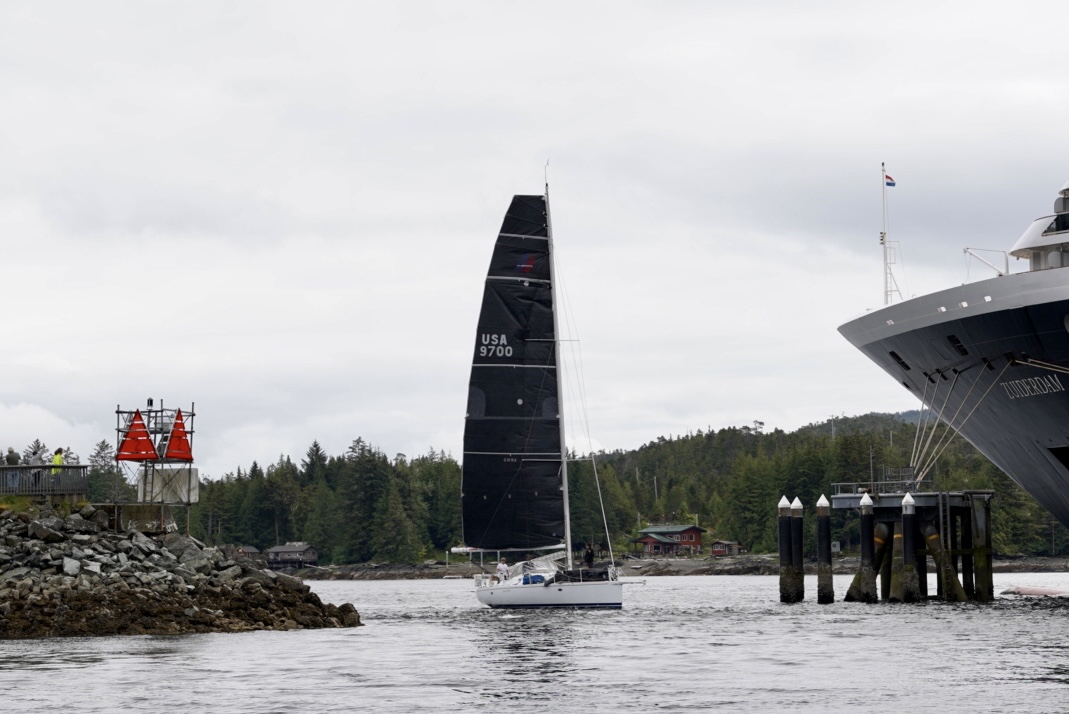 Team Pure and Wild cross the finish line of the Race to Alaska in Thomas Basin in Ketchikan. (Eric Stone/KRBD)

We’re standing on the Baranof Fishing dock in Ketchikan’s downtown Thomas Basin harbor. A Holland America cruise ship parked nearby looms overhead. Between that and a breakwater, we can’t see much of the Tongass Narrows.

But then, the black tip of the mainsail peeks out from above the breakwater.

Pure and Wild team members Jonathan McKee, Matt Pistay and Alyosha Strum-Palerm crossed the finish line just after 3:30 p.m. They glide silently to the dock, step off, and ring the traditional bell. 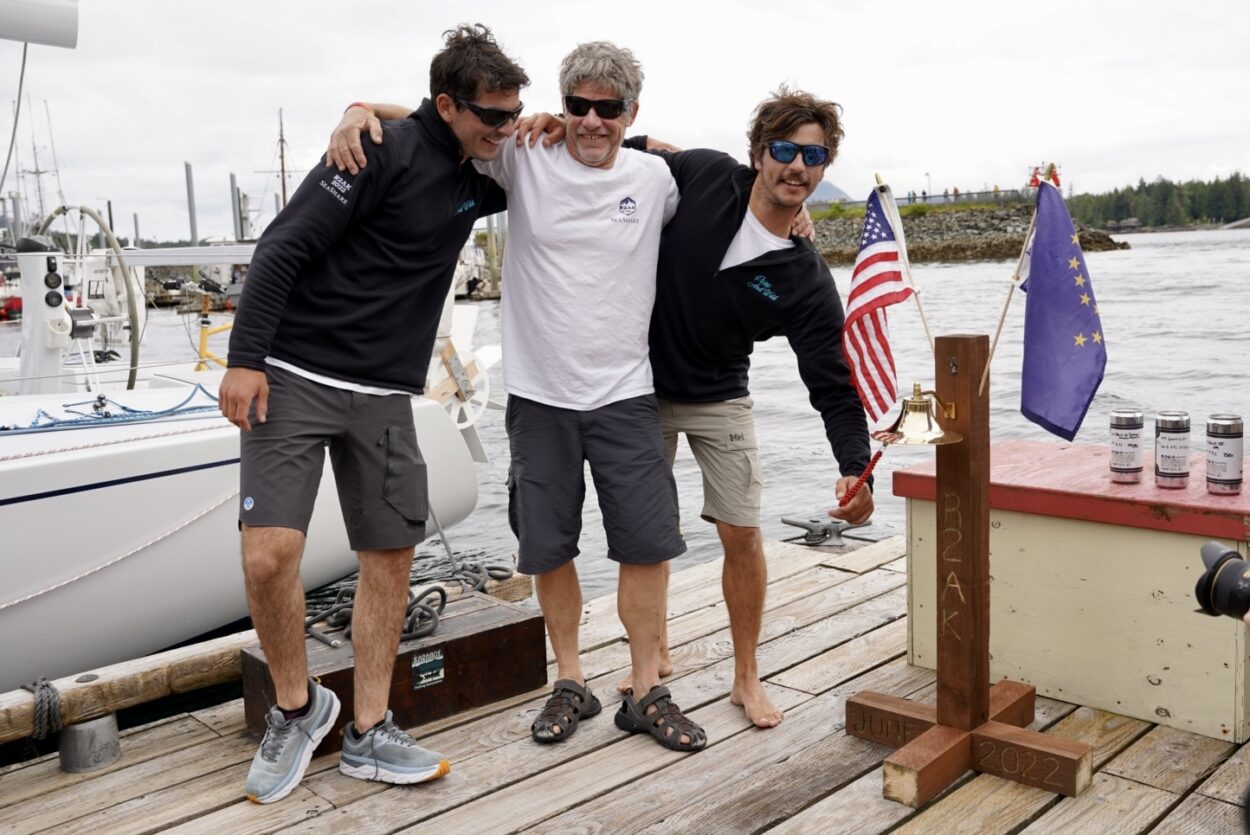 Team Pure and Wild, winners of the 2022 Race to Alaska, ring a bell at the finish line. (Eric Stone/KRBD)

McKee says it was a slow start for Pure and Wild and the two other teams who decided to take the outside route.

“I think at one point, we’d gone six miles and the lead rowers had gone 22 miles. So we were definitely way behind at the beginning. But then we got some breeze,” he said.

And they were off. The team sailed day and night — two on deck and one sleeping — and finished the race in just over four days. He says there were some tough conditions, including in Hecate Strait on the inside of Haida Gwaii near the end of the race.

“The combination of grit and preparation, I think, is what is necessary to finish this race,” he said. “And a little bit of luck.”

Pure and Wild’s Matt Pistay is the Race to Alaska’s first-ever two-time winner — he came in first with Team Angry Beavers in 2019, the last time the race was run. He says there’s nothing like the Race to Alaska.

Crew member Alyosha Strum-Palerm says the 750-mile journey is its own kind of reward.

“It’s so much more than a race for us. The whole journey of being together and being like a team and doing the things that we did that was just as valuable as winning the race,” he said.