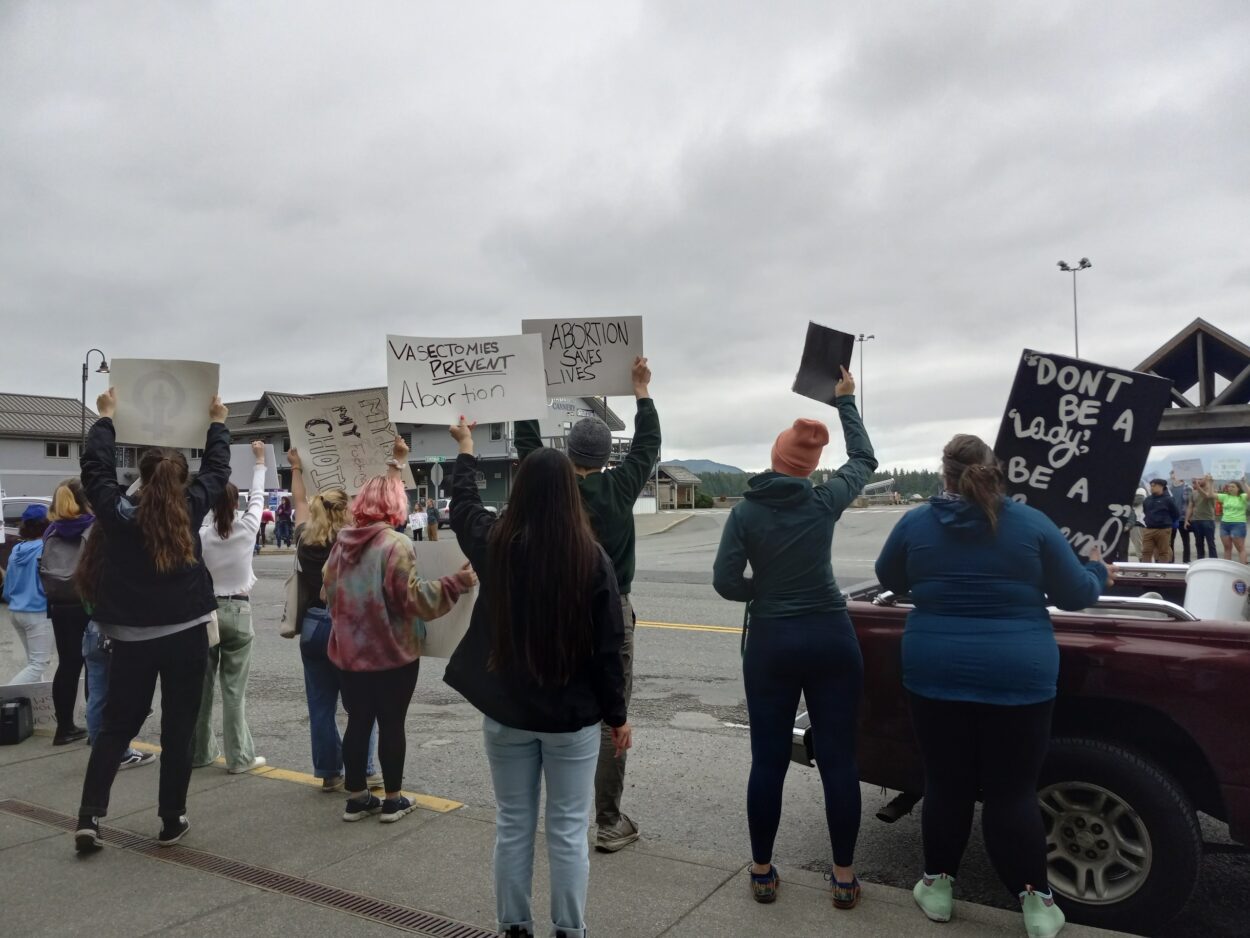 Ketchikan residents turned out for a march in support of abortion rights on Tuesday. Dozens of people carried signs and flags through Downtown Ketchikan opposing the Supreme Court’s recent decision to overturn the landmark case Roe v. Wade.

Some proclaimed that they refused to turn the clock back 49 years to the pre-Roe era. Others implored the government to stay away from their bodies. Cars honked their support.

College student Caity Pearson stood behind a handmade sign that listed possible conditions that, without a safe abortion, could kill both mother and baby. The list ranged from advanced preeclampsia to an ectopic pregnancy. 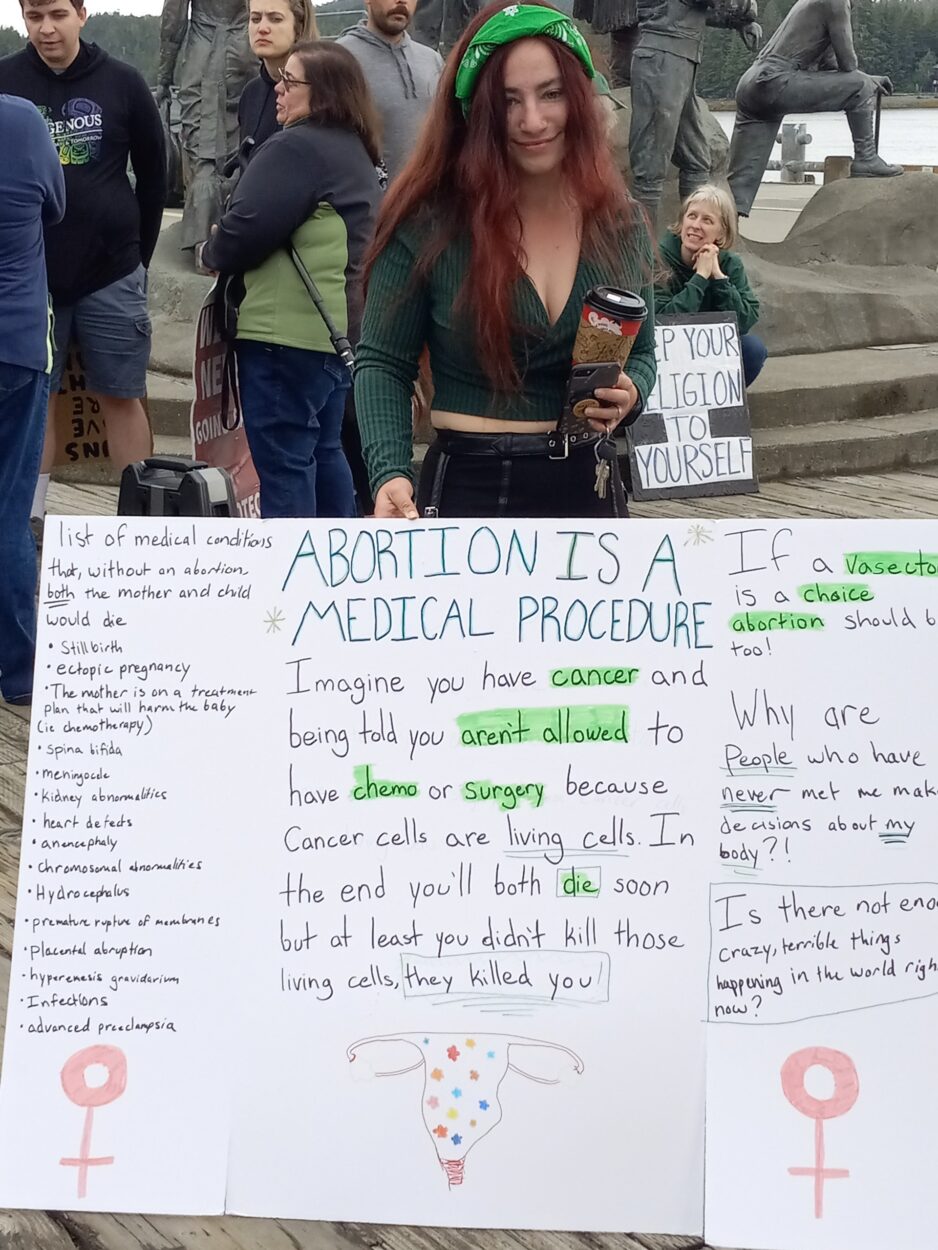 Caity Pearson stands with a sign supporting abortion access near The Rock statue on Tuesday. (KRBD photo by Raegan Miller).

“I look at it as a medical point of view, so there’s a lot of situations where you need that medical abortion, like for certain things,” Pearson said.

She said the court should reconsider. She said the justices and others opposed to abortion aren’t considering all points of view.

Pearson said the decision to overturn Roe wasn’t a surprise.

“But it’s really sad that it doesn’t surprise me anymore,” Pearson said. “It’s like, that’s just what I’ve come to be accustomed to now.”

Supreme Court Justice Clarence Thomas suggested in a concurring opinion that the legal rationale the court cited in overturning Roe could be applied to other cases protecting a wide variety of rights.

And that worries Jerzey Alderson-Bell, who graduated from Ketchikan High School last month.

“It branches out the possibilities of the possible banning of contraceptives, as well as other things that were part of the amendment that Roe v. Wade was originally part of, like gay marriages, gay relationships, interracial marriages,” Bell said. “And the possibility of those things getting overturned is a very terrifying thought.”

Bell said she hopes that the march might inspire some abortion opponents to reconsider their views..

James Heffley carried his five-month-old son, Lysander, on his chest, and said he was in disbelief.

“I’m a protected class if you will, white male, so I’ve never experienced anything like this in my life, but to see a basic right taken away from a group of people, it’s very angering,” Heffley said.

But the news didn’t surprise his wife, Miranda Heffley, who carried a sign with a clothes hanger. That’s a nod to unsafe methods women have used to attempt to abort pregnancies.

“He set it up,” she said. “So whether he’s in office now or not, we all knew it was coming. We didn’t want it to come, but we all knew this was the inevitable turnout.”

She said it was uplifting to see how many people turned out to walk. 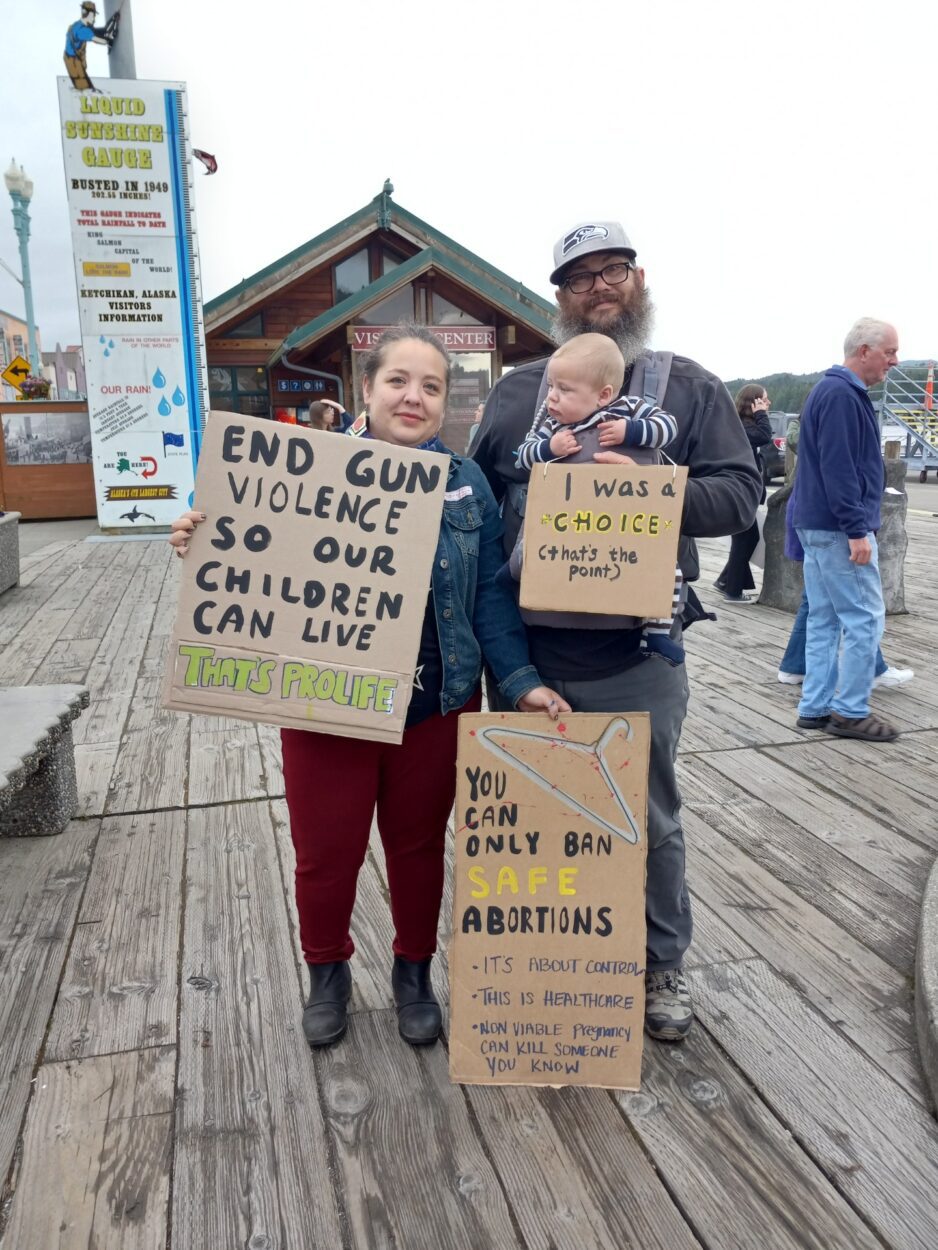 Miranda and James Heffley stand on Berth 2 with their five-month-old son Lysander before the start of Tuesday’s pro-abortion walk. (KRBD photo by Raegan Miller).

James Heffley is happy that abortion is currently protected in Alaska under the state’s constitution.

“We can show the rest of the country that Alaska does it right, so that’s awesome,” he said.

But that could change. Voters will be asked this fall whether to hold a constitutional convention, which could pave the way for substantial changes to the state’s fundamental governing document. And separately, Gov. Mike Dunleavy says he plans to ask lawmakers to amend the state’s constitution to “answer the question whether abortion shall, or not be a constitutionally protected right.”

Miranda Heffley said that she’s eager to get a state ID so she can vote.