Ketchikan Indian Community’s cultural resources director Tony Gallegos assists restoration biologist John Hudson in securing a cone over a recently filled tree. Crewmember Amy Hayward, who has been restoring the area, looks on. The tree will be embedded in the creek bed to make a better habitat for fish. (KRBD photo by Raegan Miller).

Ketchikan’s federally recognized tribe is working to improve fish habitat on lands that were once clear-cut. Ketchikan Indian Community leaders hope the pilot program near a tributary to upper Ward Creek serves as a model for future stream restoration efforts all over the southern panhandle.

The woods surrounding upper Ward Creek echo with the buzz of mosquitoes, the groans of pulleys and winches, and the gurgle of water. A crew member calls a warning to “keep out of the bite,” — that’s the intersection of pulleys that hoist trees quickly through the streams.

Ketchikan’s tribe has been working on the land owned by Saxman’s village corporation, Cape Fox, with the goal of making the creek a better home for local fish. It’s a partnership with the Juneau-based regional nonprofit Southeast Alaska Watershed Coalition.

Logging and the passage of time have changed the landscape of the creek. The harvesting reduced trees that once lined the stream banks to stumps. Stream banks are high and steep. Water levels are low.

Restoration biologist John Hudson explained that’s hurt the populations of fish that call the creek home. The area is a tributary that feeds into Ward Creek, home to several salmon species, cutthroat trout and dolly varden.

“That can have some pretty negative repercussions for fish habitat, because it turns out when a tree dies or it’s blown over by the wind and falls into the stream, it creates (an) amazing habitat for the fish,” Hudson said. “And so absent the old growth forest that’s here right now to die and fall into the stream, the fish habitat is deteriorating. It’s going downhill.” 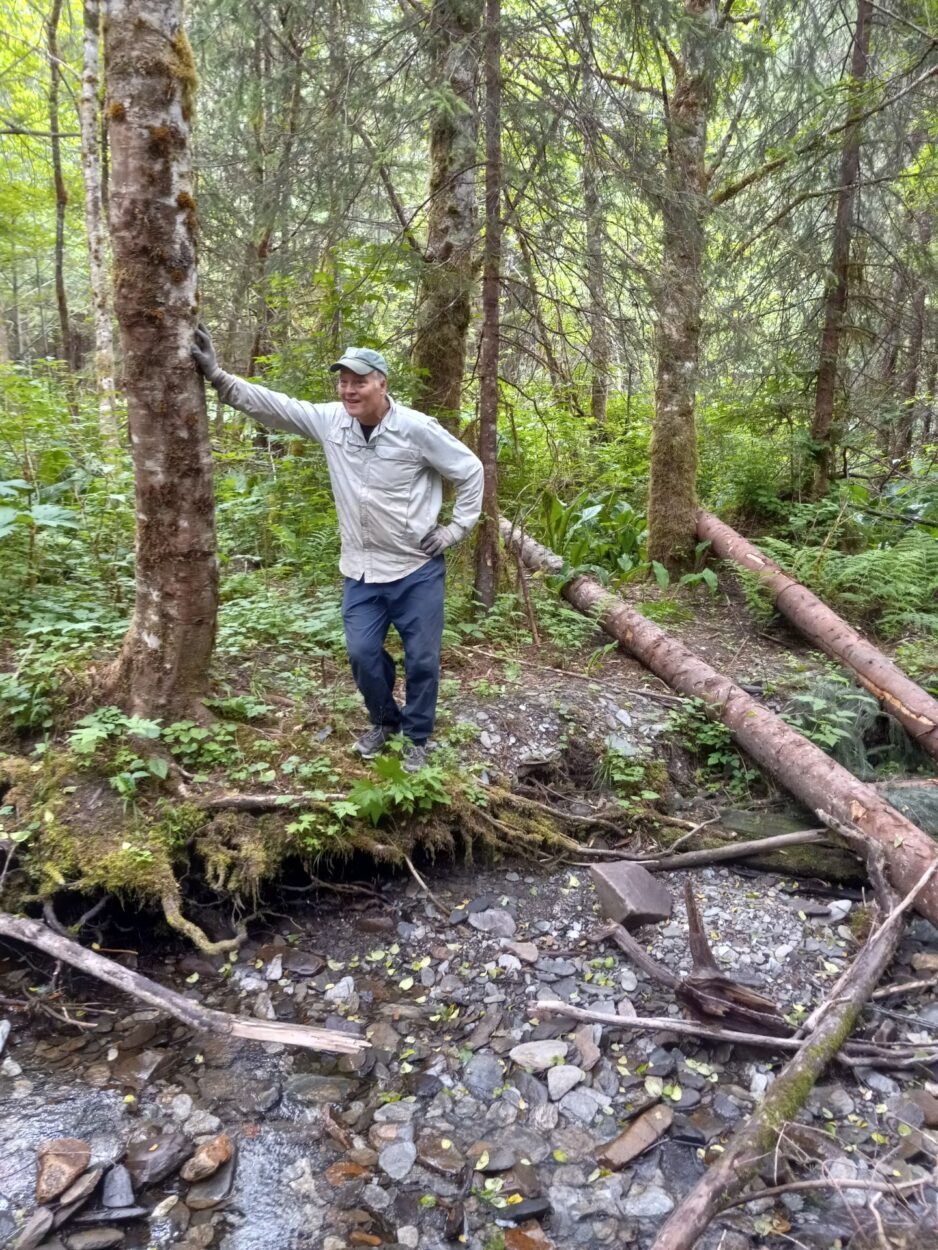 Restoration biologist John Hudson leans on a tree as he describes the work being done to sections of a Ward Creek tributary. (KRBD photo by Raegan Miller).

So the crew has been taking trees from farther beyond the creek, and replacing the deteriorating trees in the creek.

Members of the crew use a capstan winch  to help fell stronger Sitka spruce trees to replace weaker alders in the water.

Hudson explained that it’s a way to slow down the fast-moving water in this eroded creek bed.

“What you could do in a situation like this, is cut down trees, bring them in with hand powered or gas winches, and embed them in the stream in a way that you’re blocking or damming the stream a little bit to trap sediment,” he said.

“It creates these incredible pools, we call them scour pools or plunge pools,” he said. “And these pools are critically important for fish. It’s a low energy place to hang out, they don’t have to swim against the current.”

But while the work involves felling trees to be hauled into the creek, there’s a balance to be struck. Tony Gallegos, the cultural resources director for Ketchikan Indian Community, said the work is meant to disrupt the environment as little as possible.

“The whole idea is we’re not getting heavy equipment in here to tear up this, we’re repairing, what can we do by hand?” he said.

And it’s demanding. Some of the work is done with gas-powered winches. Some is done by hand or with pulleys looped around the trunks of strong trees.

Amy Hayward of Metlakatla and Josephine Guthrie of Klawock are two of the crewmembers who have been trained by KIC and SAWC to help with the restoration. They recently got back from a 10-day restoration project near Margaret Creek, about 24 and a half miles from Ketchikan.

They got weeks of on-the-job training back in May. Neither had done any work like this before. Guthrie said she wants to keep going, despite the fact that the Ward Creek job is almost done.

“I learned a lot just being here, but I want to do more with the whole saw part of it,” she said.

Gallegos said KIC is in the process of partnering with SAWC and other groups to apply for more funds to keep up the work.

“We’re seeing a resurgence of funding where it hasn’t really been in the past, so it’s kind of helping give some momentum,” Gallegos said.

Keenan Sanderson is an Indigenous Food Sovereignty Specialist with the tribe. He said there’s more to it than dropping logs into streams. It’s a group effort to protect the salmon population.

“It’s not just people out here with axes, chopping trees down,” Sanderson explained. “We have hydrologists out here, fishery biologists, (and) forest timber experts.”

And with Southeast Alaska’s legacy of clear-cut logging, it’s not just this creek that needs the help. Sanderson said there are plenty of places that once hosted robust fish populations.

“There’s definitely job security in this,” he said.

And Sanderson hopes that with some work, and time, the fish will come back.