How do you decolonize a museum? 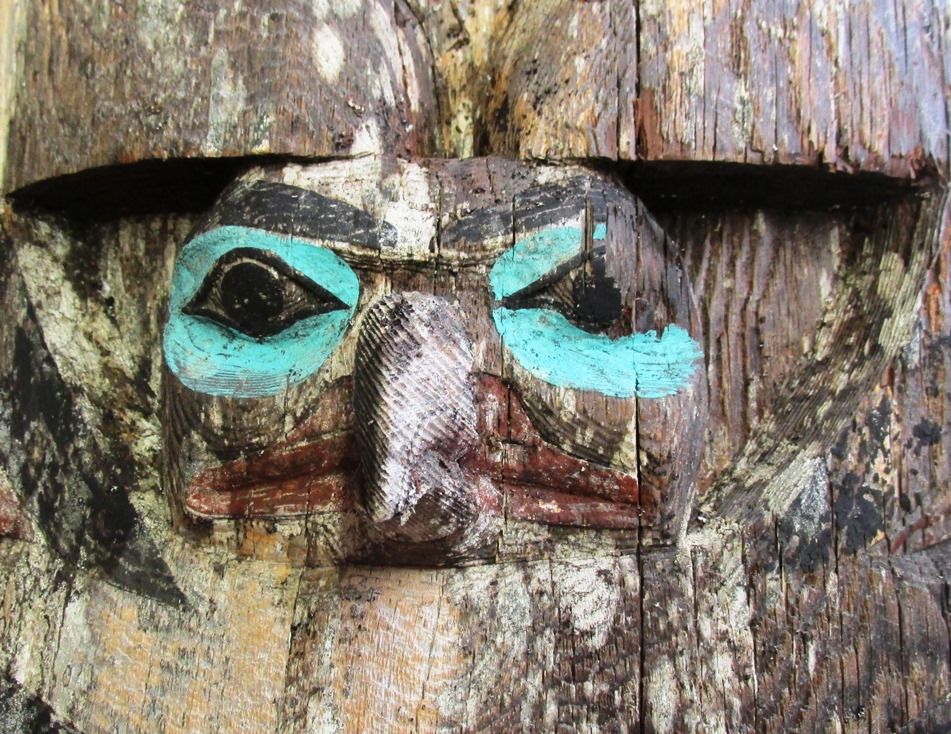 A detail from a pole donated to the Totem Heritage Center by its carver, Tsimshian artist David Boxley. (Photo by Leila Kheiry)

A graduate student from Colorado is spending the summer in Ketchikan researching the totem poles at the community’s Totem Heritage Center. It’s part of their work on a thesis about museum decolonization.

But what does that mean, exactly, to a museum, and Native communities?

Penske McCormack knows that as someone new to Ketchikan, they have a lot to absorb about the town’s history.

McCormack is in a master’s program at the University of Denver, studying museum and heritage studies. For their thesis, they chose to focus on decolonizing museum practices.

But what does it mean to decolonize a museum? McCormack explained.

“And a lot of times, ancestors and belongings end up in museums, and they have been viewed in ways that are colonial, that are from the settlers’ perspective, and are about subjecting people to views, and treatment that they would not have for themselves, and really not having them represent themselves or or have a say, in the way that their belongings or ancestors or property are treated,” they said.

Their work in Ketchikan is about totem poles and how they’re presented at the museum.

“So totem poles are, have always been, a big subject of fascination for non-native audiences,” they said.

Through the end of August, McCormack said they’re figuring out how to best represent the poles — and the people that built them.

“What I’m doing at the Totem Heritage Center, for the projects that I’m working on, is really just trying to get back into all of the history and documentation that we have, for as many of the poles as possible, to find as much information about how they got to the Heritage Center, and whose property they are, whose clan property they are, and what is the best way to represent that or to do that, and it’s kind of in the beginning stages of it now,” they said.

She said the local museum’s collection is beautiful, and that the center has done a fair job with their collections of Native items over the years, although there have been good and bad.

“I guess, maybe if anything, it would be great if there was more space for them, so they’re not, you know, confined in some of those,” Dundas said. “I think some of them are underneath the building. There are some elevated inside, you know, rooms off to the side. I think they need a bigger space.”

Anita Maxwell, the Tongass Historical Museum’s director, said that a few poles are stored within the building because they are too fragile to be exhibited. Others are cared for in the building’s lower levels due to lack of space.

Dundas also said it’s a little awkward that the City of Ketchikan manages the Totem Heritage Center — and operates cultural classes there — which in turn, houses clan property.

“I understand that there’s probably a Native board that governs that facility, that I also feel like I wish that was our own entity,” Dundas said. “That’s just me. That’s my opinion.”

The center does have an advisory committee that includes prominent local Native artists and leaders.

Dundas noted she’s visited many of the biggest museums in the Lower 48. She’s noticed that sometimes, there isn’t anything representing current Indigenous lifestyles or traditions and values included in exhibits.

“I think, we’re really historic, it looks like ‘Gosh, are we even there? Are we still around?’” Dundas said.

Dundas also thinks museums don’t always do a good job telling a complete story when it comes to Native history.

“So some of it, I feel like museums, some museums don’t tell the good, the bad, and the ugly,” she said. “There is not there is not, you know, the story of how the kids were beaten in schools, you know, when they tried to educate them.”

She said history has embedded a lot of trauma in Indigenous people — stemming from boarding schools, disease, Western education, and Christianity.

To start to heal from that, Dundas said there needs to be a way to reconnect with the pieces in museums. Not just in a small corner of the building, but in a bigger way.

How museums operate could be a key player in that process.

“I think there’s a bigger, there’s a bigger healing process than just, you know, leaving it up to the tribes and Native corporations to try to, you know, to provide services so that, you know, we could heal,” she said. “Like, we need full connection to everything to all the processes and all the healing ceremonies and, and safe spaces in places to, to heal and to and to reconnect.”

After McCormack completes their internship at the center, they’re off to Santa Fe, New Mexico to continue work on their thesis.