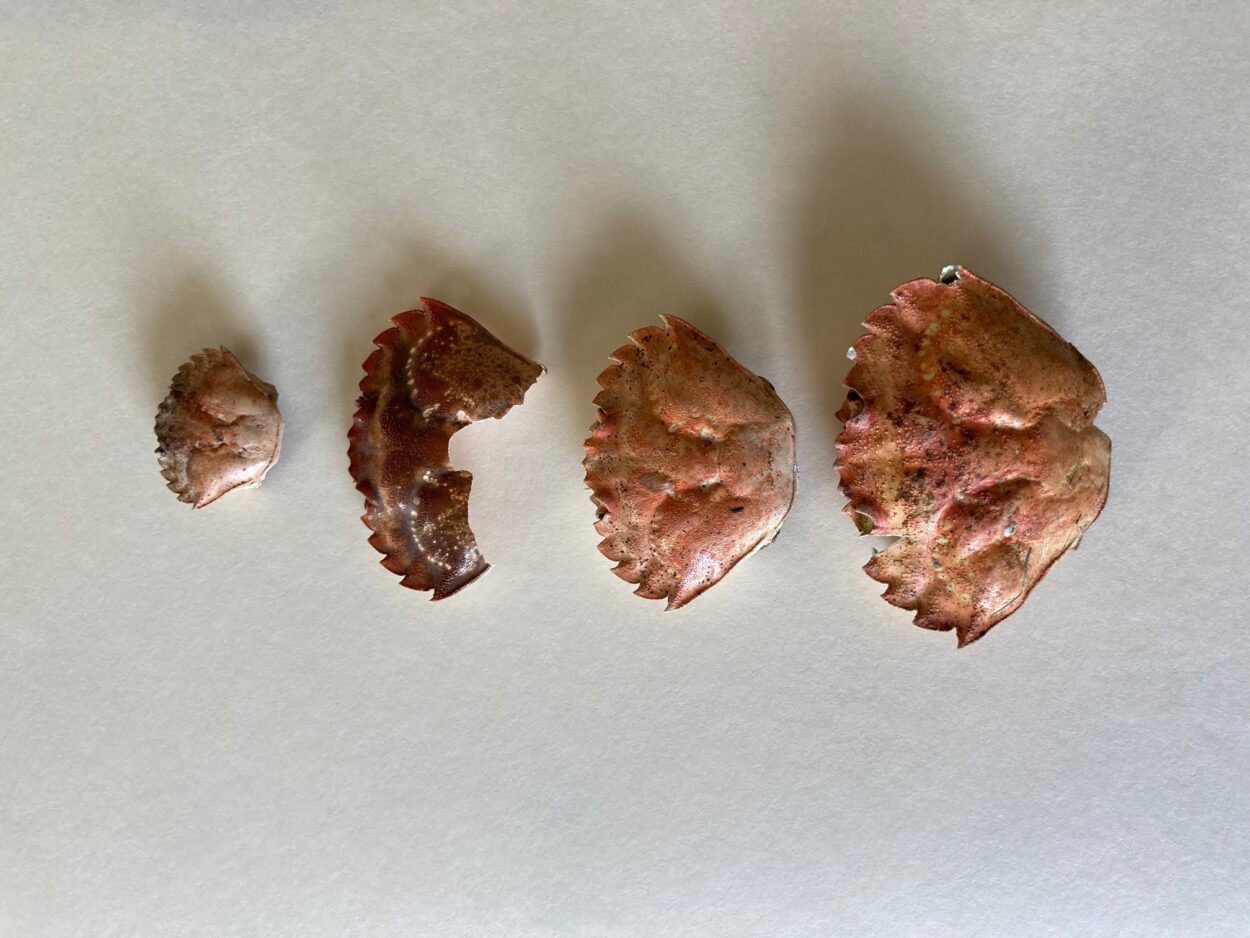 Carapaces, or shells, from invasive European green crabs found on the beaches of Annette Island this week. (Courtesy of Dustin Winter/Metlakatla Indian Community)

An invasive species with the potential to wreak havoc on important commercial and subsistence fisheries has been found in Alaska for the first time. Biologists with Metlakatla Indian Community say they’ve found the first evidence of European green crabs on Annette Island near the southern tip of Southeast Alaska.

Scientists had been looking for the crabs for years. And to their relief, so far, they had come up empty. Then came a troubling find on the beaches of Annette Island: three shells from European green crabs.

“Well, everybody was pretty much shocked, I guess, is the best word,” Dustin Winter, the director of Metlakatla Indian Community’s Fish and Wildlife department, said in a phone interview Friday.

Winter says the mid-July find, credited to Natalie Bennett, an intern with Sealaska Heritage Institute assisting with the program, is the first evidence of the invasive species’ presence in Alaska.

“On Tuesday, July 19, 2022, the MIC DFW confirmed that three shed carapaces (crab shells) from Invasive Green Crab were found on Annette Island Reserve, AK. This is the first confirmed observation of Invasive Green Crab carapaces in the State of Alaska. On July 21, 2022, five more carapaces and two fully intact juvenile carcasses were identified,” Metlakatla Indian Community said in a statement.

The tribe has been working with the National Oceanic and Atmospheric Administration to monitor the seas and shores for signs of the crab. The crustaceans are two to four inches wide, not counting their legs, with spines on their heads.

Metlakatla biologists started setting traps in 2020 after a shell fragment was found in Haida Gwaii, an island chain off the coast of northern British Columbia.

“It started out kind of small, but it’s turned into quite the project now,” Winter said. “We have three, sometimes four, people working every other week, setting pots and pulling pots and recording what kind of crabs they’re catching.”

“I think that it definitely is a reason for concern, but not any kind of panic. I think that it’s a wake up call that they are moving our way,” she said. “They are detected here now, so we need to take it seriously, but we are not in the situation — yet — that Washington state is,” Shaw said by phone on Friday.

In Washington, Gov. Jay Inslee declared an emergency over the state’s green crab infestation in January. The state has spent millions fighting the spread of the species. Last year, the Lummi Nation, near Bellingham, reported capturing 70,000 during a five-month span.

“In the past year, their populations have exploded in Washington state and Oregon,” Shaw said.

Scientists say the crustaceans are a threat to ecosystems and commercial fisheries. They uproot eelgrass beds in search of food, which serve as habitat for herring and salmon, and Shaw says they’re a particular threat to fellow shellfish.

“They compete with juvenile Dungeness crab. They are shellfish predators, so things like clams, they would directly eat,” she said. “And then there’s also anecdotal information from British Columbia that they predate on juvenile salmon.”

Invasive European green crabs have been found in U.S. waters since the 19th century — scientists say their microscopic larvae likely hitched a ride in the ballast tanks of ships crossing the Atlantic. And they’ve hurt native species — the crabs are blamed for the decline of the softshell clam fishery in Maine. 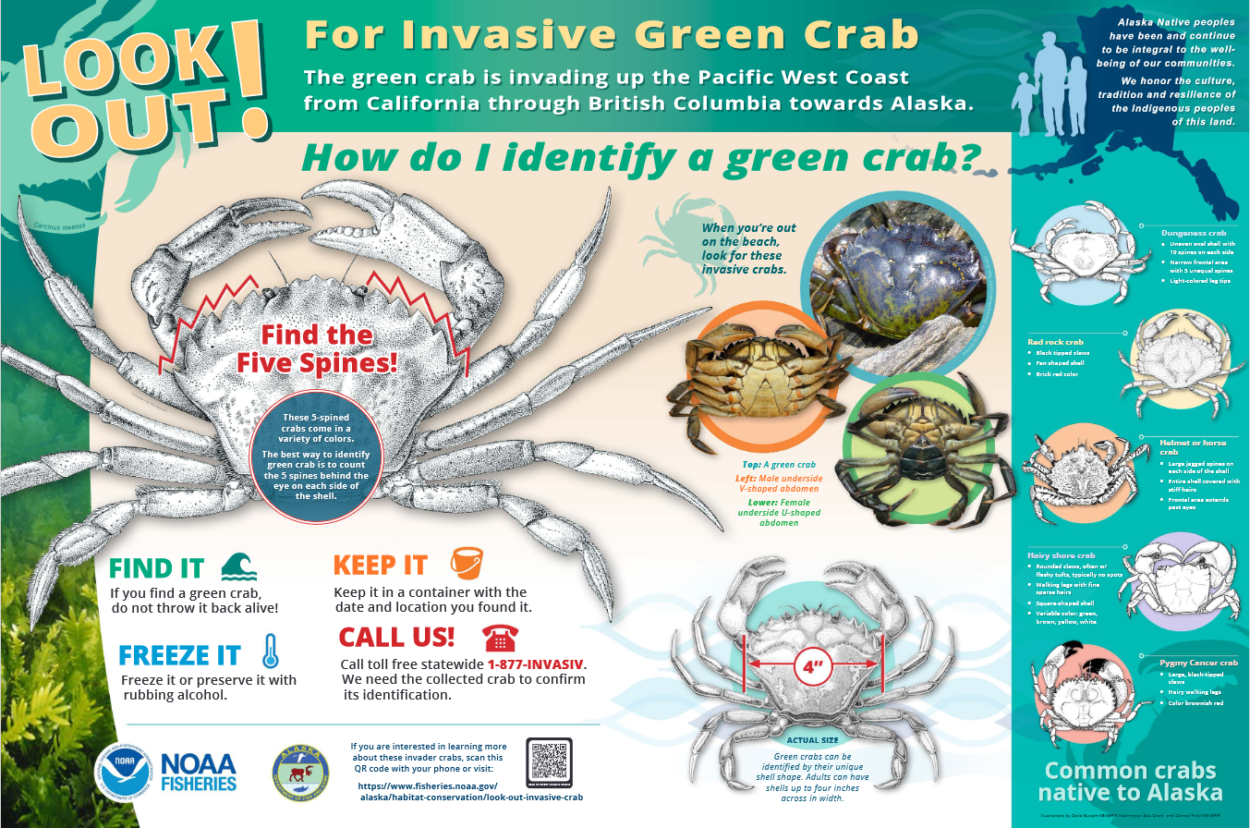 They were first found on the West Coast in 1989 in San Francisco Bay and have been spreading north and south ever since.

“Warmer temperatures would allow for greater survival and reproductive timeframe,” Shaw said. “So if it’s warmer, they have more chances to reproduce, they have better growth and they have a longer season to survive in.”

So what can be done to prevent them from spreading further north? Shaw says trapping the crabs is, for now, thought to be the most effective approach.

“Enclosed bays and areas are places where we might be able to do intensive trapping to, if not eradicate, at least control them, especially in areas where you have resources at risk that are important,” Shaw said.

It’s also important to know where the crabs are, so scientists are asking the public to keep an eye out for them. Though they’re called green crabs, they’re found in a variety of colors. Shaw says they’re most identifiable by the spines on either side of their eyes.

“We like to say, ‘find the five spines,'” Shaw said. “Green crab have five spines on either side, right and left, of their eyes, and then three bumps in the middle. And those are the only crabs in Alaska right now with those characteristics.”

Officials are asking people who find green crabs in Metlakatla to bring them to the Department of Fish and Wildlife office. Sightings can also be reported in Metlaktla and elsewhere to the Alaska Invasive Species Hotline at 1-877-INVASIV.