A working group of researchers, tribes, and residents discuss abalone sustainability in Southeast 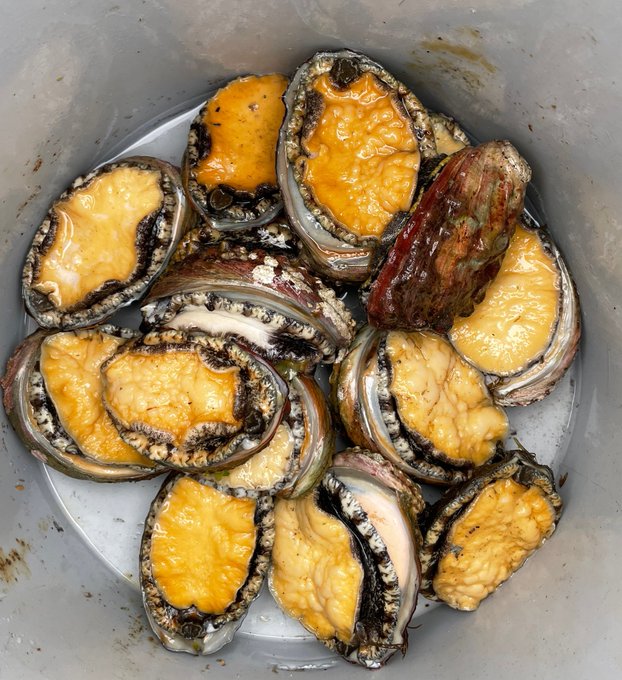 Abalone collected on July 15 near Betton Island, at a -4.2 tide. (Photo courtesy of Shelia Spores).

Federal officials are looking for ways to boost abalone stocks for subsistence and sport harvest. An Alaska Sea Grant fellow recently traveled to Prince of Wales Island to hear some ideas from residents.

Abalone is technically a marine snail. It comes in a mottled pink-and-green shell, with wispy tentacles around the broad muscle that acts as a foot, keeping it anchored to rocks.

But a past record of overharvesting has officials worried about the stunted population and reduced genetic diversity. Ocean acidification also impacts the coastal waters that the abalone call home. NOAA reports that illegal poaching of abalone is still occurring, despite the regulations in place.

Pinto abalone, the species found in Southeast, is considered endangered in Washington state and British Columbia. There have been some studies done in Alaska in recent years, like a dive study in Sitka Sound, but there hasn’t been a formal long-term study that shows what Alaska’s population of pinto abalone really looks like.

Now, scientists are looking for ways to bring back a lively supply of abalone in Southeast.

Ashley Bolwerk recently took a trip to Prince of Wales Island to hear ideas from residents. She’s an Alaska Sea Grant fellow with the habitat conservation section of the National Oceanic and Atmospheric Administration.

“I have been facilitating an abalone working group here in Southeast Alaska, which has been trying to bring together tribes and scientists and nonprofit organizations to have conversations about the future of abalone and how we can look at abalone sustainability and recovery in some places,” Bolwerk said.

Bolwerk made the trip to the island to share the news that there’s now a digital survey Alaskans can take to share their thoughts about the issue. She also met with some of NOAA’s tribal partners while on the island.

“This conversation in the abalone working group is sort of starting at the ground level of building relationships, so that we can work together across organizations and tribes and scientists,” she explained. “Just think about how we can collaborate and really help one another.”

Bolwerk said the conversations aren’t aimed at kickstarting the commercial harvest of abalone again  — that’s something that’s been off the table since 1996. And sport fishing of abalone has been banned since 2013. Subsistence harvest of the critters — by hand, on the shore — is still allowed, but limits were reduced to five per day in 2012.

“I think no one knows what the future looks like, realistically,” Bolwerk said. “But most of the conversation is around subsistence and sport harvest.”

Bolwerk also visited POW about a year ago. Hydaburg Cooperative Association environmental planner Tony Sanderson said she approached the tribe to learn more about the abalone.

“The first time she came around was for the Indigenous knowledge on where the abalone were, you know, and so, we had a few different folks bring her out and show them where (we) used to harvest abalone,” Sanderson recalled. “And then she came through with a dive team and certain sites and dove to assess the population of the abalone.”

Then, Bolwerk participated in a dive study to see what the abalone population in Hydaburg’s waters looked like. Sanderson said what she found didn’t offer a lot of hope to the people of Hydaburg.

“You know, I mean, the numbers were really really low as far as the first five inch abalone,” he said. “But one thing she did tell me is they only have to be up to three and a half inches before they start spawning, you know, so they don’t have to be really big. But you know, over the years we’ve seen our abalone going down to pretty much where you can’t even harvest them anymore.”

Bolwerk said that efforts like this trip helps to form relationships between researchers, tribes and residents.