The retired ferry Malaspina has some new residents: four refugees from the war in Ukraine 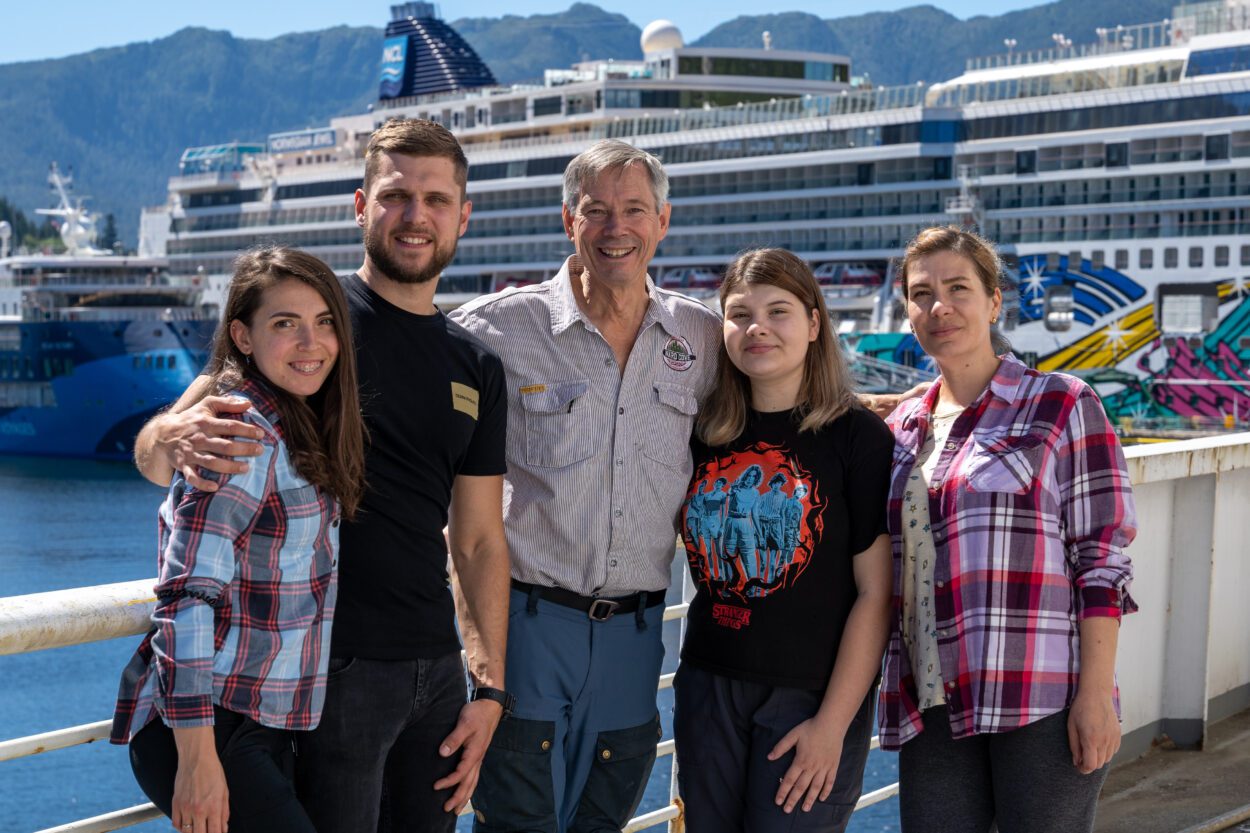 “I worked in Europe — Mediterranean Sea, North Sea, England, also,” he told KRBD on a recent Wednesday. “We worked on the big container ships.”

Now, he’s spending his days on another ship: the M/V Malaspina. The former Alaska Marine Highway ferry is undergoing a transformation after it was purchased earlier this year by the owners of The Mill at Ward Cove, a private cruise ship terminal operating out of Ketchikan’s old pulp mill.

Zakharchenko and three other refugees are working to turn the Malaspina into a museum and maritime training center and housing for the cruise terminal’s seasonal employees. And when Zakharchenko first arrived in early June, the former ferry was showing its age.

“Before, it looked like nobody had lived for three years here,” he said. “It was looking not so bad, but we needed to organize everything, it was dirty, too much dust, fuel. Not so fresh air inside. We’re cleaning, we removed everything. Some lights were not working.” 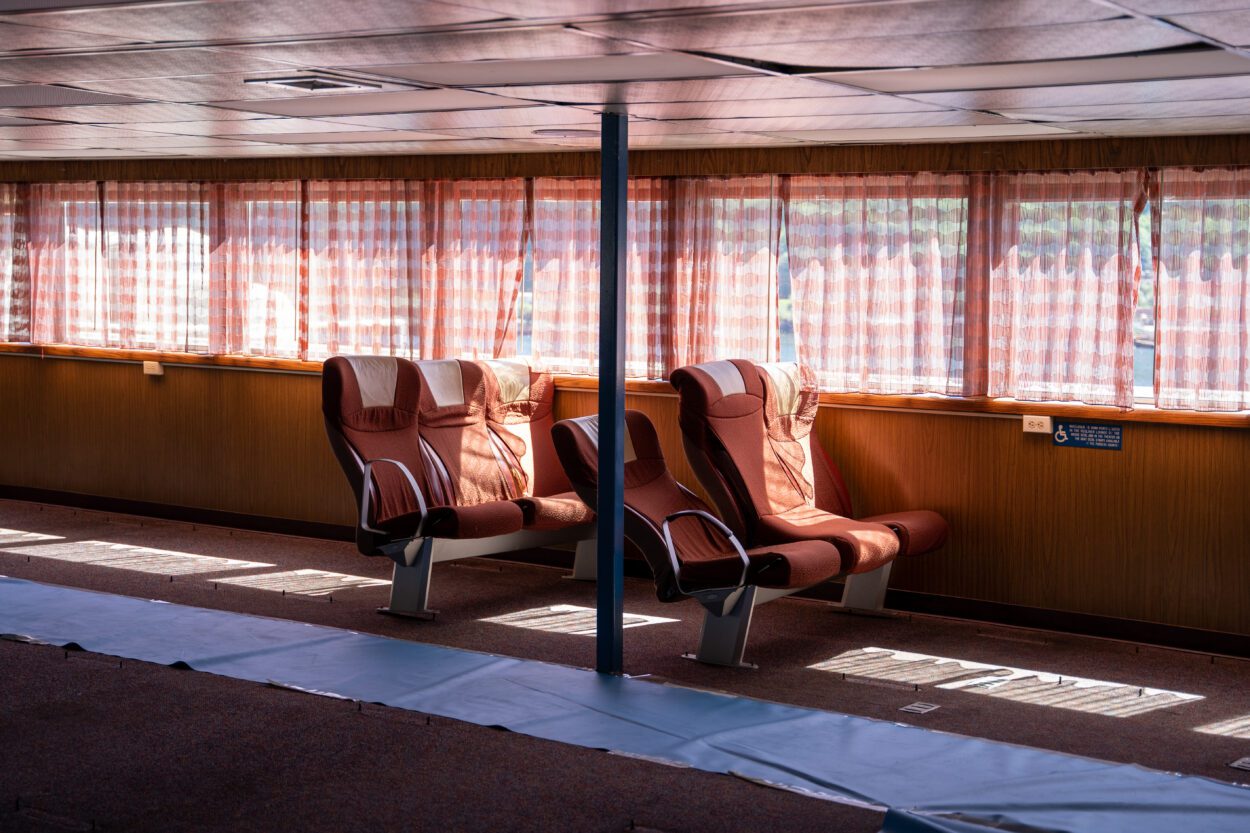 Rays of sunlight illuminate seats in the Malaspina’s “recliner lounge” on July 27, 2022. Studs from old seats protrude from the floor. (Eric Stone/KRBD)

Now, the lights are on, the water is running and 16 people are living aboard, including the four refugees and a dozen employees of the cruise terminal.

By day, Zakharchenko works on restoring the boat. In the evenings, you’re likely to find him at the Malaspina’s bar, playing foosball, watching TV or enjoying a home-cooked meal with his shipmates.

Zakharchenko came to Ketchikan from the southern Ukrainian port city of Mariupol. He says the city had grown tense since Russia’s annexation of nearby Crimea in 2014. Then, this spring, tanks and troops started pouring over Ukraine’s borders with Russia and Belarus. He knew it wouldn’t be long before the fighting arrived at his doorstep.

“It started from the 24th of February. We think it’s full-out war, and we need to find some safe place,” he said.

He fled to the western part of the country and started volunteering. He stayed in Ukraine another two weeks before he was granted permission to leave for Germany in mid-March. But his parents remained in Mariupol as the Russian army laid siege to the city.

“We don’t have any communication. We (couldn’t) call. We checked the news … we saw Mariupol was almost destroyed, and we didn’t know what happened with my family,” he said. “We were so really worried.”

For two weeks, he was left to wonder whether his parents were alive or dead as his hometown crumbled under relentless Russian artillery fire. But then, he got a call.

“My father first, what he said was, ‘We are still alive.’ It was really — I’m crying because I’m happy,” he recalled. 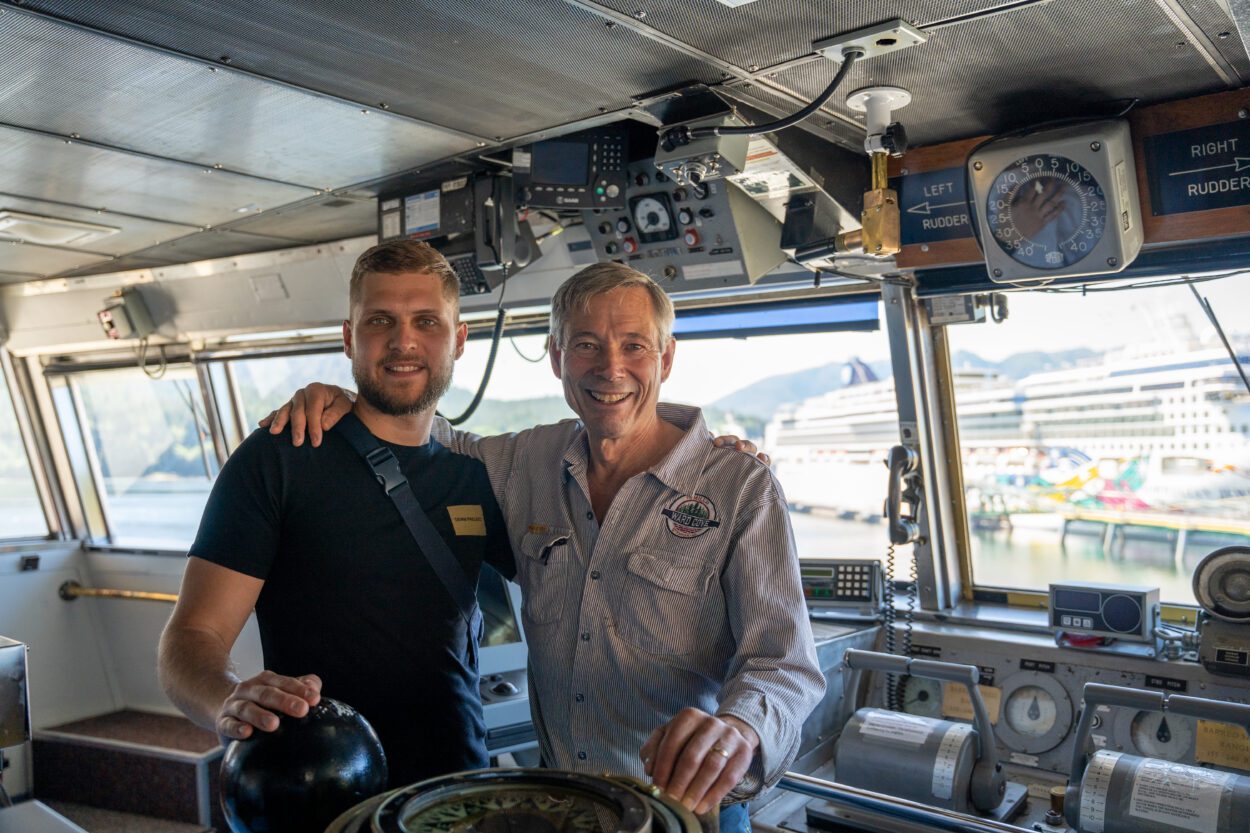 Mykyta Zakharchenko, left, poses for a photo with John Binkley on the bridge of the retired Alaska Marine Highway System ferry Malaspina on July 27, 2022. (Eric Stone/KRBD)

Meanwhile, Zakharchenko and Yelyzaveta Kovryha, his high school sweetheart and partner of 13 years, made their way to Anchorage through the Uniting for Ukraine program. The program allows Ukrainian refugees to stay in America for up to two years if they have a sponsor. That’s when longtime Alaska tourism businessman John Binkley says he got a call from his son, who was working with volunteers in Anchorage to find places to resettle refugees fleeing the war.

They arrived in early June. Binkley says he’s not paying the refugees — he says he’s not allowed to until they’re issued a Social Security number — but he’s covering all their expenses. They have an account at a local supermarket, access to a car, and use of numerous toys at the cruise terminal, like kayaks, e-bikes and sea cycles.

“And they’ve been phenomenal people, just wonderful human beings, hardworking,” Binkley said. “They have purpose here now, and we have just come to love them and appreciate them, and we feel humbled to help in some small way.”

Along with Zakharchenko and Kovryha, 16-year-old Sofia Zagrebelskaa is living aboard the Malaspina with her mother, Margarita Leontovich.

It’s the second time the family has uprooted their lives fleeing the war. They lived near the eastern Ukrainian city of Donetsk until war broke out with Russian-backed separatists in 2014. They fled to Kharkiv, but they were forced to relocate again this spring when Russian troops started bombing and shelling their new home.

Zagrebelskaa says she’s glad to be away from the fighting.

As for Zakharchenko, he says although he’s still getting used to the rain in Ketchikan, he loves the scenery.

“It’s a very beautiful place. I’ve never seen before a view like that, like here,” he said.

Zakharchenko says that if the government allows it, he could see himself staying in Ketchikan for quite a while.

“Oh, for 10 years maybe? I don’t know,” he said. “Everything is going good. I like this place. I like the people around me who support me. I’m finding new friends here. And my work is very interesting — every day I study something new.”

He’s glad to be safe. But at the same time, he yearns for home. He says he wishes he could turn back the clock to before the war and live his life in the country he loves.

“I did not want to go away from Ukraine. It was my land,” he said. “Everybody understands this.”

But for now, a berth on the Malaspina will have to do.