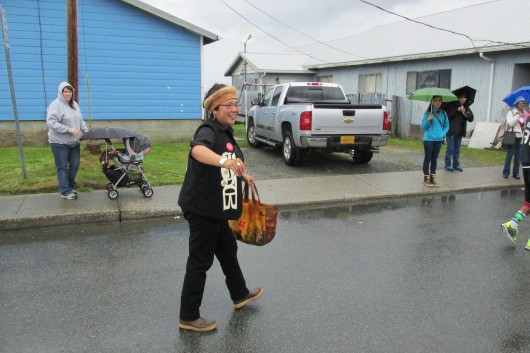 Every year on August 7, Metlakatla comes together to recognize Founder’s Day in a celebration that involves games, races, food and fireworks. Metlakatla’s mayor Albert Smith said the founder they celebrate is an English missionary named William Duncan.

“He was a missionary that helped lead the tribe over from Metlakatla, BC,” Smith said.

At the time, that tribe included some 800 Tsimshian people who followed Duncan on a roughly 70-mile canoe journey through Dixon Entrance from what is now British Columbia to start a new life in what they called New Metlakatla.

And as of the 1886 census, the community ranked fourth-biggest in Alaska, with 823 residents – Juneau-Douglas was listed as the largest, with 1,623 residents, according to SitNews.

And this year’s celebration is just a few days away.

The festivities kick off at 8:45 a.m. Sunday, when runners line up at the council chambers for a run around Annette Island — two miles for female runners, and three and a half for male runners. The parade line-up is at 10 a.m., followed by judging at 10:30 a.m. and the parade at 11 a.m.

There’s a picnic from 12:30 to 1:30 p.m. at the Metlakatla Longhouse. Field events are set for after. Games include a watermelon eating contest, seated balloon pop, dance contest, tug-of-war, kayak races and more. There’s also the slow bike race, where the last person to cross the finish line while remaining upright wins.

Fireworks will cap the celebrations at 11 p.m.

Smith said it’s a return to normal for the community after local authorities canceled last year’s regular festivities during a spike in COVID-19 cases.

In May of last year, then-mayor Reginald Atkinson issued a statement warning all residents to remain at home under penalty of potential emergency eviction from the reserve. Metlakatla ended August at the highest of its COVID-19 warning levels and without the traditional Founder’s Day celebrations.

“I think everybody’s pretty excited to have our traditional Founders Day celebration this year,” Smith said.

There’s more information about the celebration on the Metlakatla Indian Community Facebook page.