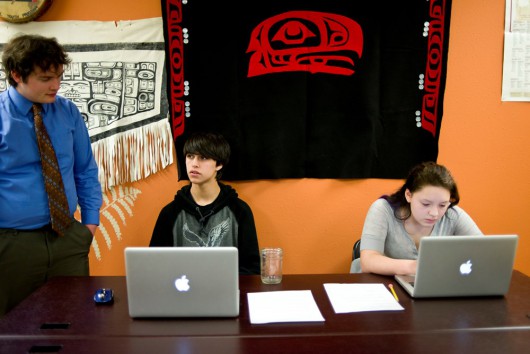 Peter Stanton hopes to spend a year away from the classroom to document a time of transition for Native people in Southeast Alaska during the 19th century.

Peter Stanton was a student on a mission, absorbing all he could about history by sitting in classes about years past in Korea, West Africa or Ireland. But by the time his senior year at Georgetown University rolled around, Stanton had come to a realization – there were plenty of interesting stories closer to home.

“I really realized that there is so much history and so much important knowledge back in my own home region, my own part of the world, that is worth exploring and that very few people know about, or that know as much as they should,” Stanton said.

Stanton said that’s why he decided to focus his undergraduate honors thesis on interactions between American settlers and Tlingit people during the 19th century.

It’s been nearly 10 years since he published that thesis. He said the idea to revisit the topic has always lingered in the back of his mind.

“I was encouraged by some of my professors — and I agreed with them and felt very strongly — that I should keep working on it, that I should keep adding to it,” Stanton explained. “And potentially that work, that research I had done in college, could be — and should be — expanded, improved, and turned into something that could be published for everybody.”

Stanton decided that this was the year to try it. So he applied for a sabbatical — Ketchikan teachers are eligible for a year off after seven years of service.

“I felt strongly that I shouldn’t wait any longer and that I shouldn’t have to wait until I retire or keep trying to work on this as a side project,” Stanton said. “I think it’s going to be really valuable to take a year and focus just on this one other educational goal.”

The school board granted his request in February. And now, he’s digging into records from Russian and American settlers, Native oral histories and written accounts, along with academic work. And he’s already getting started.

“I’d say I’ve probably read maybe 3,000-plus pages so far this summer, because these are huge, thick, historical tomes that I felt I should get through,” Stanton noted.

He said he’s looking to compile his findings in a book that tells a compelling, accurate story that’s accessible to everyone.

“There are very few books out there, specifically about the challenges, the struggles and the successes of Native peoples, over the hugely transformational time of the 19th century,” Stanton said.

Sonya Skan thinks Stanton’s book could be just that. She directs the education department for Ketchikan Indian Community but spoke on her own behalf.

“He has such a respect, and such a heart for the people in the land, that I’m personally, this is for me, personally, I’m looking forward very much to see what he has, because I feel like it will be something that will be good for everyone,” Skan said.

She said she’s impressed by his grasp of the subject matter — she first ran across his work when Stanton started teaching in KIC’s Tribal Scholars program.

“I found his blogs and things and just how he was learning the language, the Tlingit language that he was learning, all of the things he was learning and sharing on his blog,” she explained. “And I was like, this is amazing, that he’s an amazing young man.”

She said she hopes Stanton’s book will help fill gaps in the historical record. She said too often, important episodes that shaped Ketchikan and Southeast Alaska’s history are swept under the rug.

The working title of Stanton’s book is “Tlingit History from Independence to Assimilation.” He’s aiming to finish the book by next spring.