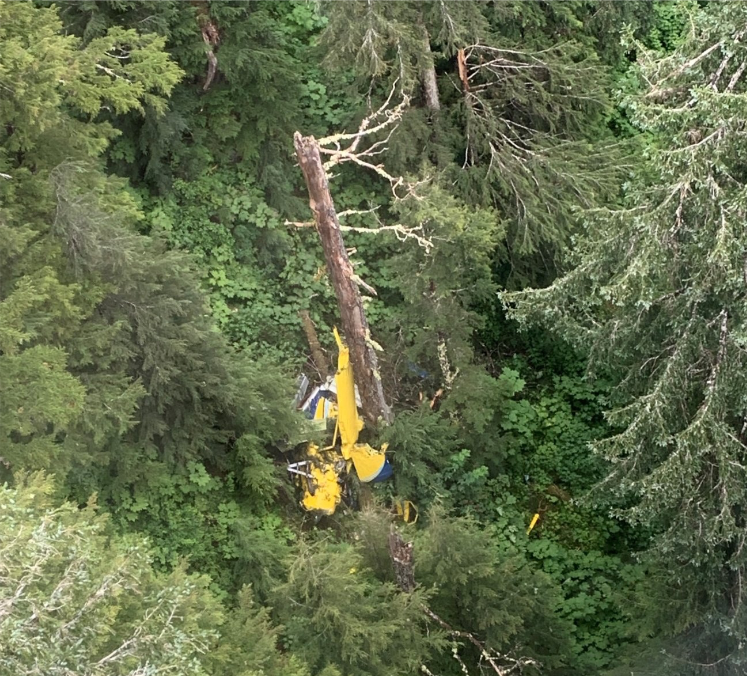 An aerial view of the plane at the accident site in Misty Fjords National Monument Wilderness. (NTSB photo)

The families of four cruise passengers killed in a floatplane crash near Ketchikan last year are suing Holland America Line in federal court. They’re also suing the floatplane operator and the estate of the pilot.

The families of Andrea McArthur, Rachel McArthur, Jacquelyn Komplin and Janet Kroll accuse the cruise line of pressuring floatplane companies to operate unsafely and failing to warn passengers of the risks.

Just over a year ago, a bright yellow-and-blue DeHavilland Beaver floatplane crashed into treetops on a steep slope in Misty Fjords National Monument Wilderness, about 12 miles northeast of Ketchikan. The incident killed the pilot and all five passengers aboard, who had arrived in the region on the Holland America ship Nieuw Amsterdam.

Now, families of four of the passengers are suing Holland America Line. Their suit was filed Aug. 1 in the Western District of Washington in Seattle. An attorney for the families, Heather Cover, says the cruise line was required to inform passengers that floatplane tours could be hazardous.

“Under maritime law, Holland America has a duty to warn its passengers of known dangers,” Cover said in a phone interview on Friday. “And here, where the seaplane accident occurred, actually has a pretty prolific history of seaplane crashes and deaths.”

She’s referring to the fact that at least 21 people have died in plane crashes in the area in the past seven years. That includes a 2015 crash that killed eight people.

“In that case, the NTSB, the National Transportation Safety Board, had actually written a letter to the cruise ship industry, including Holland America, warning that the schedules of the cruise ships could actually be contributing to this dangerous condition whereby you are having so many crashes and fatalities,” she said.

The NTSB found the operator in the 2015 case, Promech Air, had a culture that encouraged pilots to fly in hazardous weather — in part because of scheduling pressures from cruise lines.

But unlike that crash, Holland America says the 2021 floatplane tour wasn’t sold or advertised by the cruise line.

“We were incredibly saddened by this tragedy and our hearts go out to the families of those who died. This floatplane excursion was independently operated and purchased separately by the impacted guests and not sold through or advertised by Holland America Line. Safety is of utmost importance to us, and our contracts with tour operators emphasize it as a top priority,” the company said in a statement.

What caused last year’s crash isn’t clear — the NTSB’s Clint Johnson said the agency is reviewing its final report and expects to release it soon. But search and rescue aircraft and other nearby pilots reported poor visibility and low clouds around the time of the crash.

The families are also suing Southeast Aviation, the small, family-run carrier that operated the fatal flight. Cover, the attorney for the families, says the company didn’t do enough to make sure the pilot was good to go after a prior accident.

“Just a couple of weeks before this incident, the pilot was taking off and actually ran into a buoy and flipped his plane,” Cover said. “He was taken out of rotation for a couple of weeks, and then came back — no additional training, no nothing. It was just kind of a matter of if he felt that he was able to come back to work, and he was permitted to do so.”

Southeast Aviation did not return a call for comment.

The pilot, Rolf Lanzendorfer, had worked for Southeast Aviation seasonally since 2015 and had logged about 8,000 hours flying similar aircraft. His estate is also named in the lawsuit. The plaintiffs accuse him of failing to account for poor weather conditions.

The families are seeking unspecified monetary damages in the wrongful death lawsuit.

Holland America, Southeast Aviation and the pilot’s estate are due to file their responses in court later this month.