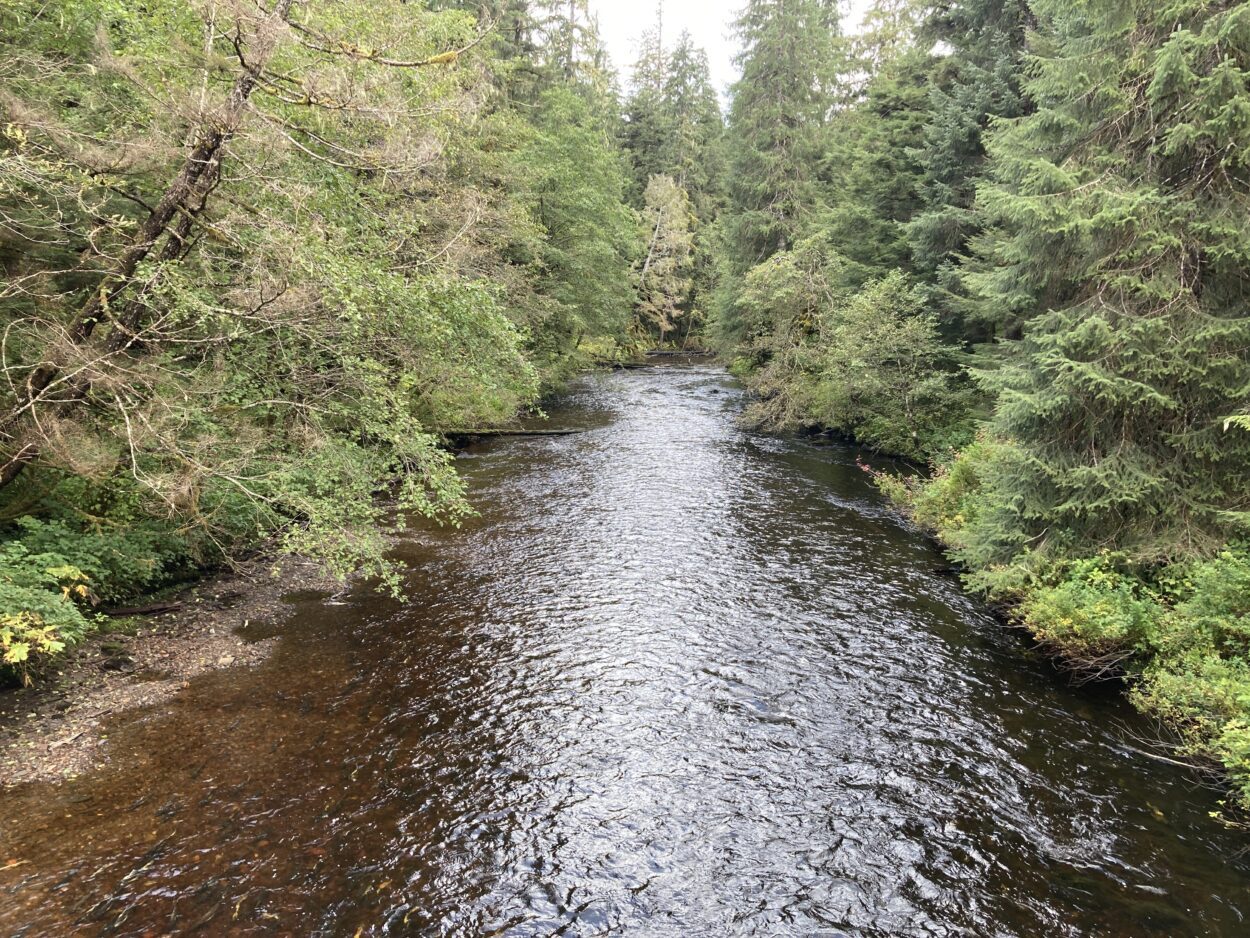 A stream restoration project at a popular bear-viewing destination more than 20 miles north of Ketchikan has been completed after two years.

About 22 miles north of Ketchikan lies Margaret Creek, accessible only by boat or float plane. It was heavily damaged by intensive logging in the 1950s through 80s.

That logging took out most of the old-growth timber that lined the creek, eroding the banks and damaging floodplains.

John Hudson is a restoration biologist with the Southeast Alaska Watershed Coalition. He remembers visiting the area when he first moved to Alaska.

“And I got to know the stream really, really well,” Hudson said. “This is in the mid 90s. And I was kind of struck by all the big stumps that were in the middle of the stream or on the edge of the stream, brand new to the rainforest, and not clearly understanding what the impact was back then.”

The damage has had major impacts on the natural habitat of sockeye, coho and chum, plus the Dolly Varden and cutthroat trout that run through the area.

The Watershed Coalition said the completed restoration work will — hopefully — reverse the damage, by creating better spots for the fish to feed, swim and rest.

The project also provided shade to cool the water, stabilized the banks of the creek and created more fish pools. 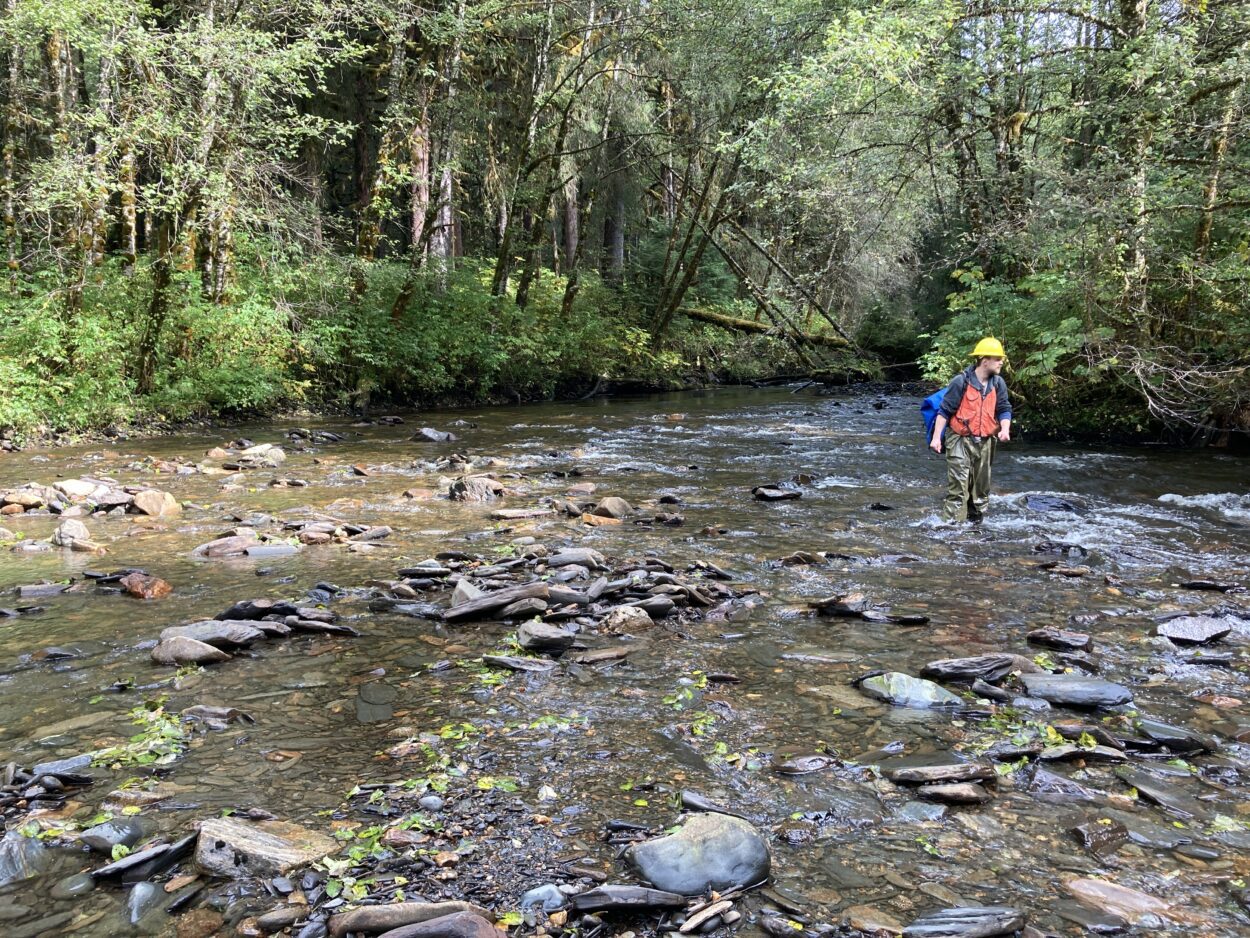 A crew member walks up the stream, looking for areas that would benefit from habitat enhancement. (Photo courtesy of Khrystl Brouillette).

To make the project happen, the coalition partnered with Ketchikan Indian Community and the U.S. Forest Service, and got to work training hand crews. They were tasked with restoring parts of the creek that machines couldn’t get to, using tools like chainsaws, cinches, pulleys and axes. 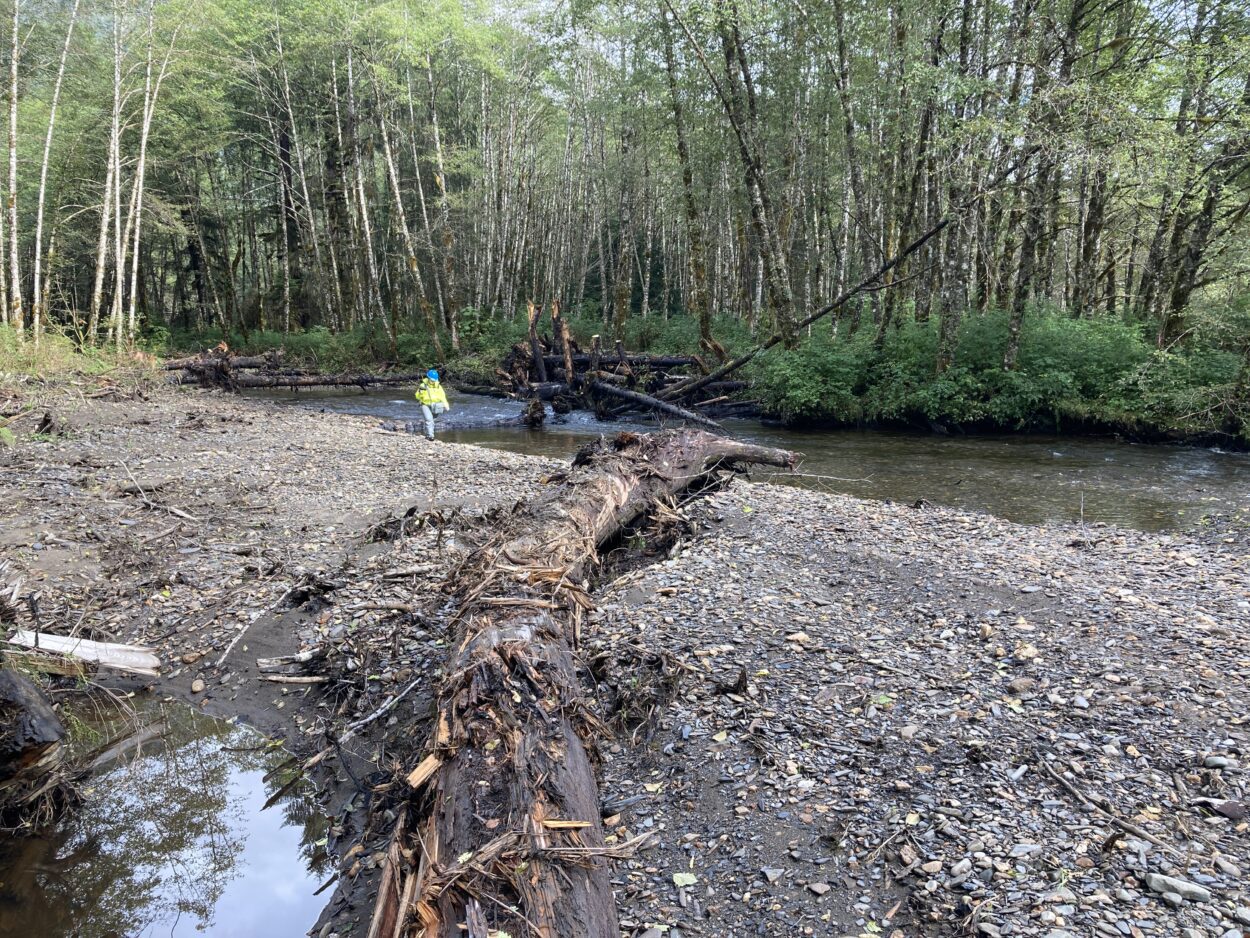 Tony Gallegos is the cultural resource director for Ketchikan’s tribe. He said the program sought to train crews not just for this restoration project, but for future work as well..

“And of course, when they were working in Margaret Creek, they were in pretty primitive conditions for a week, dealing with weather and camping out and a remote location off the grid, but they thrived and and really felt like it was like a major life changing experience in most cases,” Gallegos said. 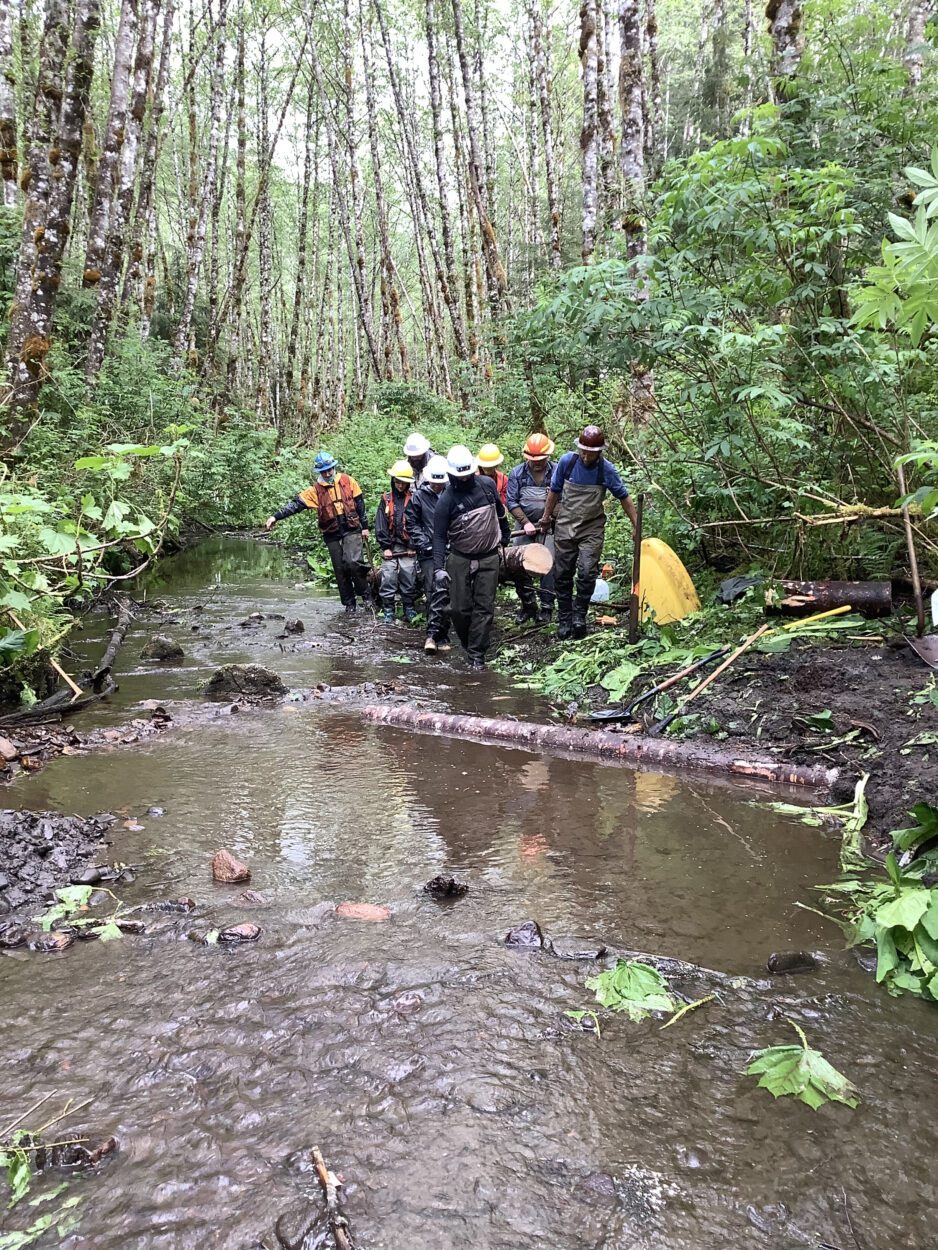 Crew members work to carry a log to the restoration location. (Photo courtesy of Khrystl Brouillette).

The watershed coalition estimated that the project cost around $400,000.

Heavy machinery started rolling into the area last year, and hand crews continued to work through last month. The Forest Service’s Jon Hyde, with the Ketchikan Misty Fjords Ranger District, explained work was planned for more than a mile of the creek.

“And then we had additional work planned all the way up to around the two mile marker for hand crew work,” Gallegos said. “So we use the hand crew to go in and put individual logs in, where machines couldn’t go or it was too hard to access.”

Crews placed more than 20 logs in the stream to help give salmon a place to rest, and removed four log culverts that were blocking fish passage. Workers also removed 1,000 feet of packed soil and added other debris to create more than 200 meters of habitat. 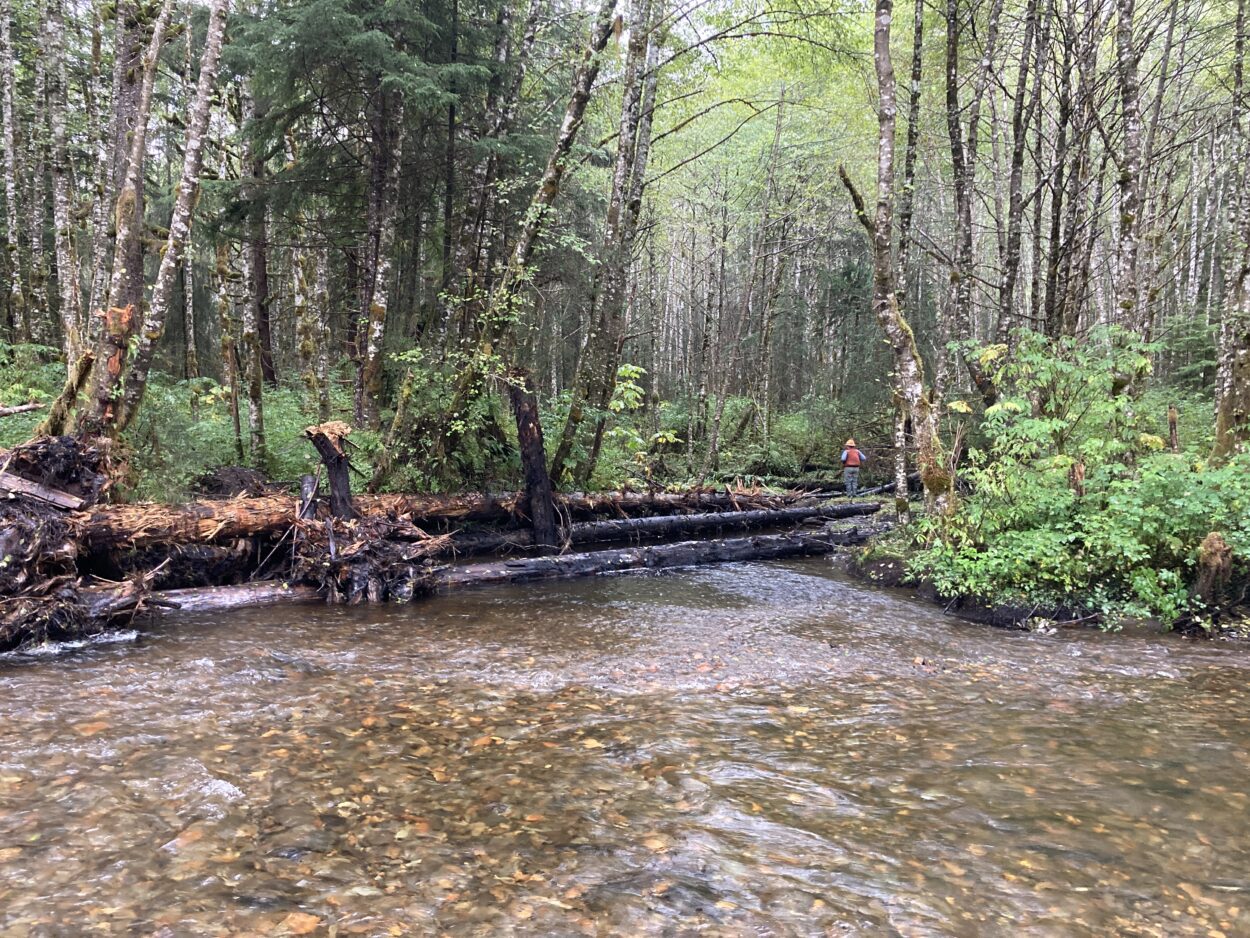 Hyde said it took a long time to plan the project and submit plans for approval.

“Once implementation happened, it was smooth, that went really well,” Hyde said. “But yeah, I guess the planning stage just getting up getting everything ready to get this off the ground was probably the hardest part.”

And he said the project could have impacts on more than just the salmon.

“You know, it affects everything in the ecosystem,” Hyde explained. “So it’s more food for the eagles, for bears, for wolves.”

Earlier this summer, a similar project wrapped up at Ward Creek, north of Ketchikan near Talbot Lake.