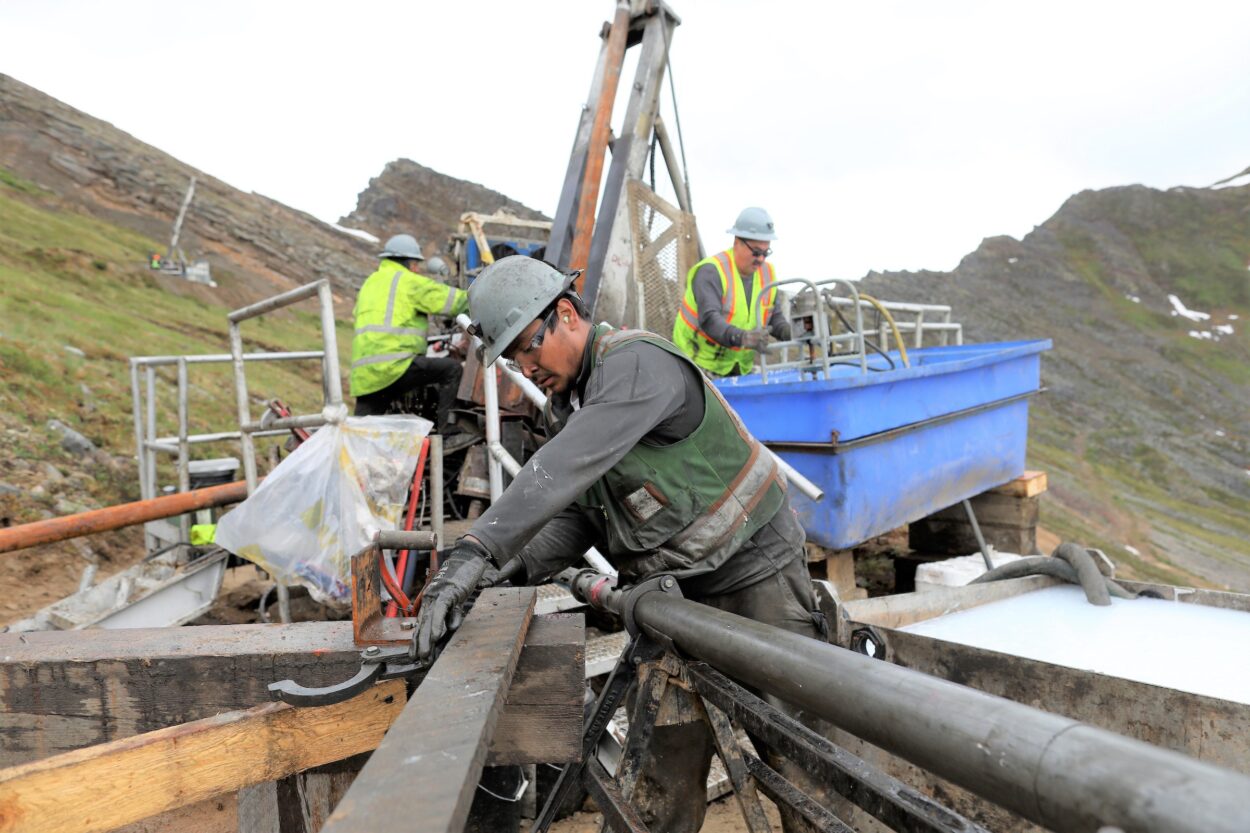 Drillers work on a rig at the Arctic Deposit in the Ambler Mining District in August 2022. (Courtesy of Ambler Metals, LLC)

President Joe Biden signed the Democrats’ tax and climate package known as the Inflation Reduction Act into law this week.

Among the law’s key provisions are a $7,500 tax credit for new electric vehicles — but only if the cobalt, graphite and other minerals in the EVs’ batteries come from domestic or friendly sources. Experts say that provision and others in the bill could spur mine development in Alaska.

“There are about zero cars on the US market today that could potentially qualify for these credits,” Ryan said in an interview.

That’s because starting in 2024, 40% of the metals used in electric vehicle battery production — cobalt, manganese, nickel, lithium and graphite — have to be either extracted or processed in the U.S. or a friendly country to qualify for the credit. That figure moves to 80% by 2027. And none can come from so-called “foreign entities of concern” — that’s diplomatese for China and Russia.

“So essentially, the supply chain implications are the real story,” Ryan said.

Most of the lithium used in the lithium-ion batteries that go into EVs comes from Australia and Chile, says economist Brett Watson at the University of Alaska Anchorage’s Institute of Social and Economic Research.

“Those would qualify under the tax credit provisions, which require sourcing materials from nations that have a free trade agreement with the United States, which both of those nations do,” Watson said in an interview.

But that’s not the case for some of the other minerals used in batteries.

“Cobalt, on the other hand, is mostly sourced from the Democratic Republic of the Congo,” Watson said.

The U.S. doesn’t have a free trade agreement with Congo. And that means EV manufacturers will have to source their cobalt elsewhere. Maybe from recycling. Or maybe from Alaska.

“Cobalt is being prospected right now from the Ambler district,” Watson said.

That’s a mining prospect in Northwest Alaska. And whether it’ll turn into a mine is far from a sure bet — the project has been mired in controversy for years.

But the company hoping to develop the Ambler Mining District sees the Inflation Reduction Act as an encouraging sign. And not just because of the tax credits for cobalt.

“What it boils down to is that the companies that are in mining can write off 10% of the cost of their operations if they produce one single critical mineral,” Fawaz said in an interview.

There’s a long list of minerals that qualify — from aluminum to zinc.

“Our first project will be called the Arctic project, and once we make a decision to invest and start construction, the mine will operate and mainly produce copper and zinc and other metals sometime in the late ‘20s,” Fawaz said.

Cobalt production from the so-called Bornite Deposit would start much later. But will the Inflation Reduction Act’s tax credit be enough to move the needle towards getting a mine built?

“It’s a complex question, of course, because it does help, for sure,” Fawaz said. “But there are so many factors in making, realizing a project like ours.”

Like, for example, whether a planned 200-plus-mile road to the mining district will move forward. The state’s investment agency has poured millions into efforts to build the road, but the project stalled in February after the Biden administration said an environmental analysis of the road was flawed.

The push for more domestic minerals to support green technology could have far-reaching effects all over the state. Watson, the economist, points to a prospect called Graphite One outside Nome as another potential beneficiary of the Inflation Reduction Act’s electric vehicle tax credit. And in Southeast, he says the advanced manufacturing credit could make development of a rare earth mine on Prince of Wales Island and a processing facility planned for the Ketchikan area an easier sell.

“So you could imagine that facility and Ketchikan applying for that advanced manufacturing tax credit,” Watson said. “So there’s something in the bill potentially for the Ketchikan Bokan Ridge facility as well.”

But Watson says what would truly move the needle is a bill that would reform the sometimes decades-long permitting process to get mines built. That’s reportedly part of the deal that created the Inflation Reduction Act, but no bill has been filed in Congress yet.