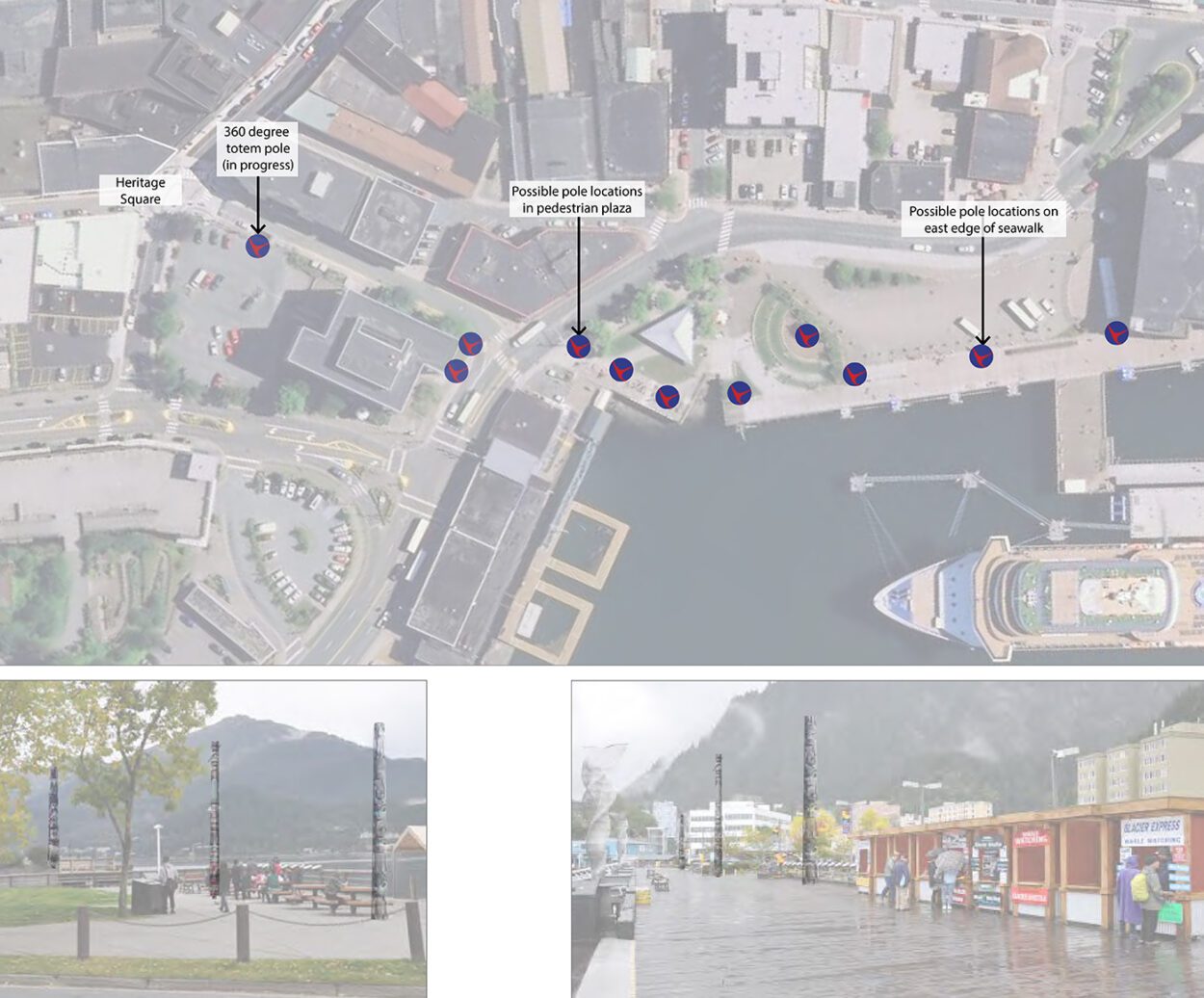 The Sealaska Heritage Institute invited master carvers and their apprentices in Southeast to create 10 totem poles representing Tlingit, Haida, and Tsimshian cultures. They’ll be part of SHI’s Totem Pole Trail — which will ultimately include 30 poles — and be installed on Juneau’s waterfront sometime next year.

The Sealaska Heritage Institute sees Juneau as the Northwest Coast art capital of the world. And they hope the Totem Pole Trail will help visitors see it the same way.

Sealaska’s long-term goal is for invited carvers to make a total of 30 poles that will line Juneau’s waterfront. These first 10 poles will be placed along  Juneau’s Main Street toward Marine Park.

“Our traditional poles historically dominated the shorelines of our ancestral homelands and told the world who we were,” SHI’s president, Rosita Worl, said in a news release. “It’s fitting that our totems will be one of the first things people see while sailing into Juneau.”

SHI said in the release that the first 10 poles are being funded by a $2.9 million grant from the Andrew W. Mellon Foundation. Those funds support the artists, and cover the cost of donating the logs to be carved.

All the carvers will be working with apprentices.

SHI is estimating the installation will start next year, along with storyboards and plaques for each pole.

KRBD spoke individually with seven of the artists working on the trail. This story features the artists from Prince of Wales Island and Metlakatla.

Boxley gets excited when he thinks about traditional carvings being the first look of Juneau that tourists get.

“I think it’s easy for people to forget — and too often — Indigenous folks are thought of, for the lack of a better word, and the word that a lot of Westerners use, is primitive,” he said. “And we were not. The northwest coast was a thriving ancient civilization, here on the northwest coast.”

The Metlakatla carver is creating a pole representing the Tsimshian  people. He started carving at the age of six, guided by his father David A. Boxley. Since then, he’s finished more than 25 poles. This won’t be the first time Boxley’s worked with SHI. Both the Boxleys carved the house front inside the Walter Soboleff building.

Boxley’s pole for Juneau will feature the crests of the Eagle, Raven, Wolf and Killer Whale moieties.

“And so they’re going to go in order of their origin in our history,” Boxley explained. “So at the top is the killer whale and grizzly bear for the Killer Whale clan, and then a raven and frog for the Raven clan. And a beaver and eagle for the Eagle clan, and the bottom of wolf and crane for the Wolf clan.”

Klawock’s Jon Rowan is one of three carvers working on the trail from Prince of Wales Island.

“It’s a pole for the Ishkahittaan people, they’re out of the Taku River, and it’s a raven, frog and sea lion that’s being represented on that (pole),” Rowan said.

Rowan credited his father and many POW teachers with sparking his love for carving.

“It seems like I’ve always been involved in it,” he said. “My dad used to do it back in the 60s. And that’s where I probably got hooked.”

TJ Young is a Haida carver, born and raised in Hydaburg. He’s working on two poles for the Juneau project. One will feature a Haida Raven crest, and the other, a Tlingit Raven crest.

Young said he takes a lot of inspiration from his grandfather whose generation  was discouraged from sharing traditional knowledge like carving. He feels lucky he was able to learn.

He said it made his grandfather proud to watch him and his brother carve. His brother Joe Young also is carving a pole for the trail. KRBD was unable to contact Joe Young by the time this story was published.

He said he’s looking forward to seeing the differences between all the poles when the project is complete.

“It’s going to be really interesting to  notice the differences between styles and colors,” he said. “And even though it’s Tlingit, Haida, and Tsimshian,I think there’s gonna be a nice little variety of totem poles to look at and to enjoy. So that’s kind of exciting.”

Young said he has a December deadline to finish his carving.

This story includes only the carvers from Metlakatla and Prince of Wales Island who spoke with KRBD. We’ll hear from other carvers involved in the project in future KRBD news stories this week.