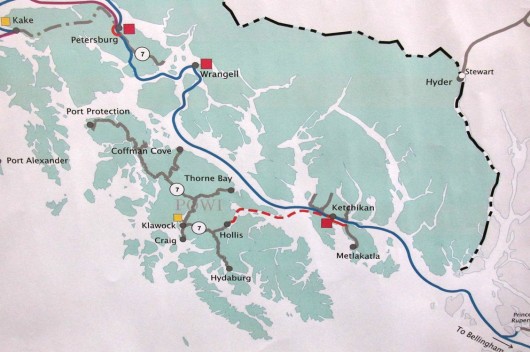 A handful of local residents attended the meeting, and one of the concerns raised is a planned reduction of ferry service between Ketchikan and Prince Rupert, British Columbia.

The proposed reduction would affect summer sailings only, and would cut that service in half. Instead of four trips per week, the Alaska Marine Highway System would offer two.

Jim Potdevin is the Southeast Region marine systems planner. He said the reduced service is an effort to improve efficiency and save money.

“Right now, the traffic out of Prince Rupert can be handled by one mainliner,” he said. “We’re running two ships at roughly 50 percent full, while we could be running one, doing two trips a week at 100 percent full.”

While those numbers might seem reasonable, Dennis Watson –general manager for the InterIsland Ferry Authority – spoke up and said that reducing ferry trips won’t fill the boats.

“The reason the IFA happened is because the Marine Highway System frequency service out there just kept going down and down and down, and instead of getting fuller boats, the whole thing was starting to collapse,” he said.

Watson was referring to the state’s now-defunct ferry service to Prince of Wales Island, which IFA offers on a daily basis. He said that more ferry trips, rather than fewer, would increase ridership.

Following the meeting, Watson expanded on his comments. He said the state also could increase ridership by working with the Canadian government to ease travel restrictions.

“There’s a lot of problems with going through Canada right now. I think we need to sit down with Canada and try to work some of them out,” he said. “That Prince Rupert route used to be really full boats when the Aurora ran out of there. I think it could get back to that if we could get some of the regulation out of it and certainly reducing service I don’t think is going to be the best way to get a good result.”

The need for a passport to get in and out of Canada is one such regulation, but there are also travel restrictions on people who have been convicted of certain offenses, such as driving under the influence.

“I just talked to a guy yesterday who wants me to write him a letter, he got (a DUI) 30 years ago,” Watson said. “This is a little bit different deal, but he’s a merchant mariner and they want to be able to work in Canada and he can’t get off the boat. Nobody wants to have bad people go to their country, but people who made a mistake a long time ago shouldn’t have to keep paying for it.”

The draft transportation plan calls for two Prince Rupert trips weekly in the winter months as well as summer, which means wintertime service would increase slightly.

In addition to the proposed summer service reduction for Prince Rupert, the draft Southeast Alaska Transportation Plan includes a reduction in Ketchikan-to-Wrangell ferry runs; it would go from five to four in the summer.

Another concern raised at the public input meeting is a terminal in Saxman to serve the Metlakatla ferry run. Lee Wallace wants the state to take another look at building that terminal, which he said would cut the length of the ferry ride in half, and therefore decrease fuel costs for the state.

“That’s going to increase economies and increase opportunities … for Metlakatla, Saxman and Ketchikan,” Wallace said. “It really needs to be brought back up to a high level at that STIP.”

Potdevin responded that Saxman residents had resisted a plan to build a terminal there, but Wallace said that’s because the state insisted on buying the property.

“Saxman is made up of one square mile. So the citizens voted against the sale. What they wanted to propose was a long-term lease,” he said.

Potdevin said he’ll take that information back to DOT officials for another look.

Other comments offered during the meeting included a desire for more bike and walking paths next to the state highway, requests for better maintenance of current state roads within Ketchikan, and a couple requests that the state build a bridge to Gravina Island.

The Southeast Alaska Transportation Plan is updated every five years. It offers a general outline for the region, along with a schedule for major projects. One of those big projects is construction of two Alaska Class ferries, which likely will be built at the Ketchikan shipyard. The first ferry is expected to be done and operating by 2016.

The comment period for the draft Southeast Alaska Transportation Plan closes on Sept. 30.

For information about how to submit comments, and to download a copy of the draft plan, go to http://dot.alaska.gov/sereg/projects/satp/index.shtml