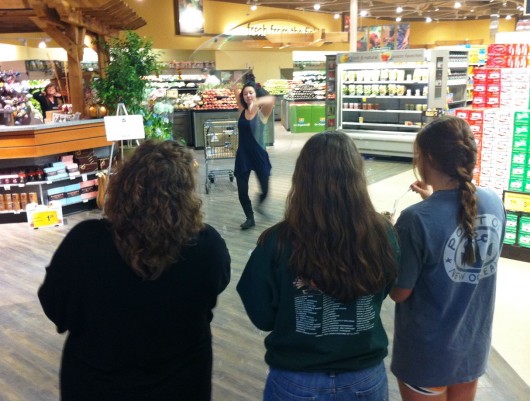 The Ketchikan Area Arts and Humanities Council has committed another random act of art. Dancer Tika Hoop performed at three grocery stores during the noon hour on Wednesday, confusing a few people who just wanted their groceries, and delighting others.

It takes a lot of planning to create a random act of art.

In this case, the Arts Council needed permission from grocery store managers for Tika Hoop to dance in the middle of Tatsuda’s IGA, Carrs-Safeway and Alaskan and Proud. Then they needed bubbles.

“Tika knows where all the bubbles are in town, which I find amusing,” said Arts Council Executive Director Kathleen Light as she opens a package of small individual bubble tubes, complete with wands, and hands them out to bystanders to blow bubbles during the performance. “Have a bubble. Don’t 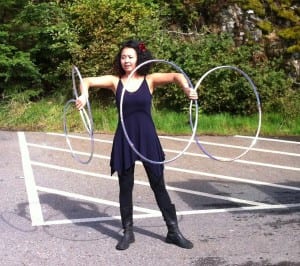 Tika Hoop prepares for her performance outside of Tatsuda’s IGA.

blow them on the produce.”

Before the performance started, Jeff Carson, stopping for some groceries at Tatsuda’s, wanted to know what was going on.

“Give me a hint,” he said, so I told him there are hula hoops involved.

Gigglefeet is an annual dance festival in Ketchikan, and Tika Hoop received standing ovations for her performances during that August event. By the way, Tika Hoop is a stage name. Her real name is “Kartikasari Klaresta. But you can call me Tika.”

In between the display aisles and checkout lanes, Tika danced with her hoops, and people watched while waiting in line.

Tika says she’s been addicted to dancing with hoops for about eight years, and isn’t a stranger to random acts of a different flavor.

“I’ve been doing bubble flash mobs. That’s kind of like a random act of art, but I’ve never done the hoop part in a grocery,” she said. “It’s something new, something exciting. It’s good. Trying to do something random, trying to get people’s attention; that’s the tricky part.”

After a brief applause the random performance moved on to Safeway, and finally, A&P 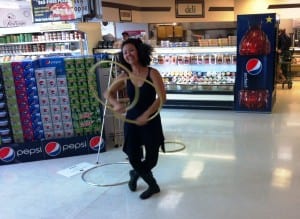 “For this one, I’m going to try to use this mag-hoop,” she said outside of A&P. “It’s three small-size hoops, and they’re actually magnetic on the side. It creates this extra illusion.”

Random acts of art started earlier this year, part of the Arts Council’s participation in the New Pathways Alaska program. That program helps nonprofit groups remain relevant to their communities.

Light says random acts of art are a way to see art differently, and the earlier acts were well received.

“So we thought we’d continue random acts of art randomly throughout the community. This is one of those events,” she said.

And now you’re warned: If you suddenly come upon art in an unexpected place, it might be another well-planned random act.