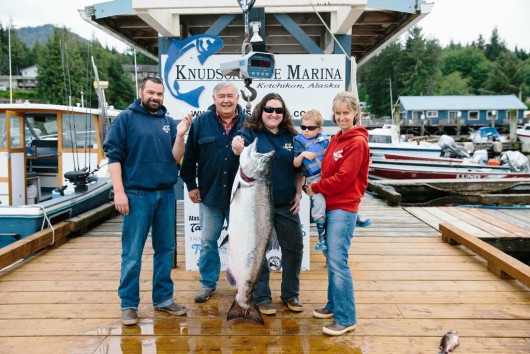 Fishing– and winning — the derby is a family tradition for Misty Pattison, who has unofficially won this year’s Ketchikan CHARR King Salmon Derby with her 48.6-pound lunker.

Pattison’s victory doesn’t become official until the June 24 awards ceremony, but her Chinook is the largest by far on the leaderboard. It tops her brother-in-law, Brian Brissette’s second-place fish by more than 10 pounds.

Pattison naturally didn’t say where she caught her winning king on June 5 – the second weekend of the three-weekend derby — but she happily shared the fish story.

“It was pretty quiet that day and we just kept working this one area. My pole got a bite and I went and set the hook, and as soon as I set the hook, it just screamed line out and just never stopped until I had about a quarter of the spool left on my line. I was kind of getting nervous,” she said. “As soon as he stopped, I was able to really slowly start pumping him in. We never saw him until he got to the boat. As soon as he got to the boat, my dad netted him and we started jumping up and down, screaming and hollering, super excited that we caught such a big fish.” 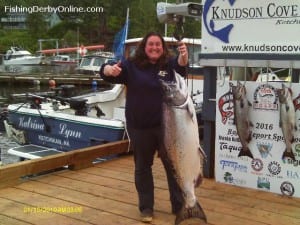 Pattison said they kept fishing a while longer, in case there were any more big ones down there. They decided to come back only after her brother-in-law hooked himself in the finger.

She said she’s been fishing the derby pretty much all her life.

“It’s kind of a family tradition to go out there and fish,” she said. “Both my grandparents, my dad, my uncle, have won the derby. The rest of the family, we’ve come close but never actually done it. I’m pretty excited to be the fifth family member to win the derby.”

Pattison’s big fish will provide quite a few meals. She said her dad, Bill Pattison, cut it up for her.

“It was such a big fish, and normally I’d smoke it or can it, so we decided to make steaks out of it,” she said. “So, I have a whole freezer full of extremely large steaks, which is pretty cool.”

The family will have plenty of prize-winning salmon to eat this year. In addition to her brother-in-law, who caught his 37-pound, second-place fish on Sunday, Pattison’s mother placed in the top-10, too. Louise Pattison caught her sixth-place, 31-pound king on May 30 – the Ketchikan derby’s opening weekend.

You can see a full list of unofficial prize winners online at http://www.ketchikankingsalmonderby.com/leader.html