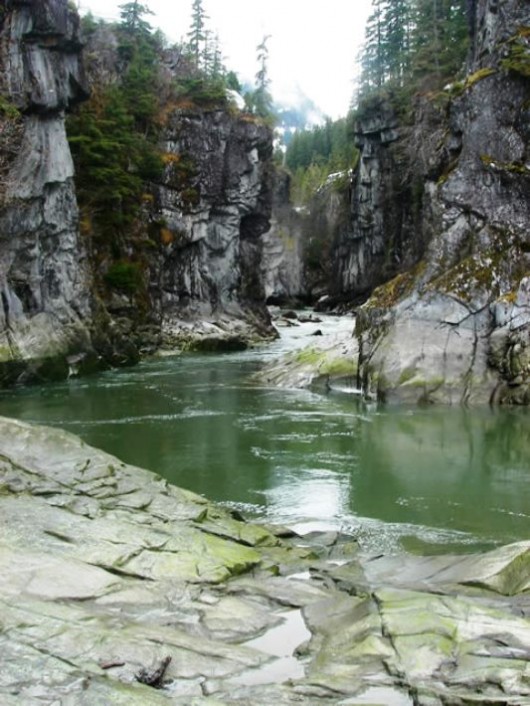 This image courtesy AP&T shows the Soule River, about eight miles from Hyder.

The EA calls for authorizing exploration of the site for potential development. It would allow three helicopter platforms, use of stream gauges and a cable crossing system, as well as seismic work.

The Federal Energy Regulatory Commission issued a three-year preliminary permit for the project in May, but a Forest Service permit also is needed for the exploratory work.

Soule River is in Portland Canal just outside of the Misty Fiords National Monument.  Locally, the area is called Glacier Bay, and while it’s not technically wilderness, its LUD, or Land Use Designation, under the Tongass Land Management Plan is remote recreation.

Alaska Power and Telephone is spearheading the 77.4-megawatt project, and has been working on the licensing portion for about eight years. Two years ago, the U.S. Forest Service submitted comments about the project, stating that, as proposed, the Soule River dam would have “significant irreversible and irretrievable effects to the environment.”

However, the current EA states that, with mitigation measures in place, the exploration work would not create any significant environmental consequences.

A 30-day public comment period on the Environmental Assessment opened Dec. 10th. For an earlier story about this project, search for “Soule” under local news on this website.