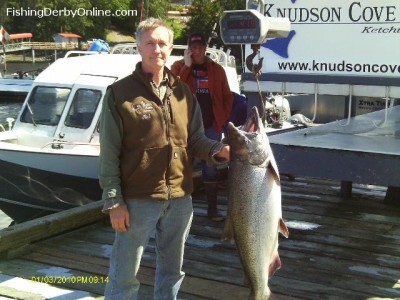 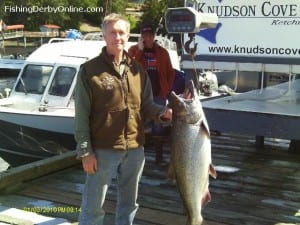 Rick Forrester is the unofficial winner of the Ketchikan CHARR King Salmon Derby. Forrester caught the 42-pound king on the first weekend of the three-weekend event. Forrester describes what happened.

“It didn’t feel like there was anything on my line and I thought I saw a splash quite a ways behind the boat. Once I got the slack out of the line, he just took off and took quite a bit of line. We had no idea how big he was. Once he quit running I pulled back on the rod and the rod just bent rather than the fish moved. We had to back down on him. My buddy Guy Mickel was backing it up with his outboard trying to catch the fish so I could retrieve some of my line. And once the line went straight down it took about 20 minutes but we got him tired out enough to where he came right into the net without any worries. It’s pretty remarkable.”

Forrester says when he caught it, he knew it would be a prize-winning fish but didn’t imagine it would be the biggest.

At 42 pounds even, this is the lightest fish to win the derby in its 67 year history.
Most anglers are reluctant to reveal where or how they caught their fish. Forrester says he didn’t do anything special, but he did reveal one thing.

“I just always use whole herring. This particular time I wasn’t using a flasher. I don’t know. I’m lucky. It was all luck.”

The top prize in the Ketchikan CHARR King Salmon Derby includes $10,000 cash, plus an additional $67 representing the number of years the derby has been held.