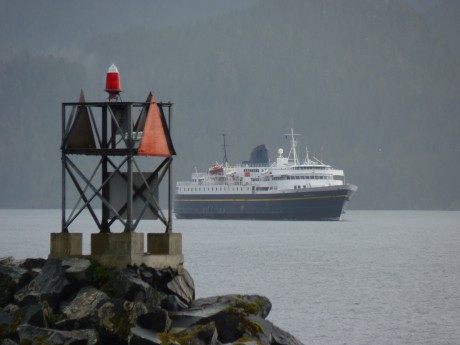 The ferry Malaspina makes a rare visit to waters off downtown Sitka during the 2010 Alaska Day celebration. A state transportation plan would route ferries to a new terminal across Baranof Island at the end of a new road. (Ed Schoenfeld/CoastAlaska News)

Southeast Alaskans can learn more about regional transportation projects at a series of meetings starting Aug. 6.

The state Department of Transportation is hosting the sessions during August and September. They’ll focus on the latest version of the Southeast Alaska Transportation Plan.

“There will be an open house that will be two hours prior to the meeting at some locations, and an hour at the smaller communities. And then for about an hour or two, the plan will be presented to the public,” he says.

Comments will be collected during the meetings.

The plan calls for three large, expensive road projects. One would run north from Juneau and another would cross Baranof Island from Sitka. The third would link Kake and Petersburg. All would end at new ferry terminals.

The transportation plan also calls for building up to two new ferries and retiring three old ones. It also includes an airport for Angoon.

Woodrow says presenters will talk about projects planned for each community.

“We’ll also talk about the region as a whole because all the communities in Southeast are connected in one way or another. So it’s important to talk about how we can keep these communities connected and also what we have planned for their community and specifics,” he says.

The meetings begin Aug. 6th in Juneau. They end Sept. 10th in Haines. Sessions will also be held in Angoon, Petersburg, Ketchikan, Sitka, Kake and Skagway.

Woodrow suggests reading the transportation plan before attending a meeting.

Read an in-depth story on what the plan recommends.

The public meeting schedule is as follows: