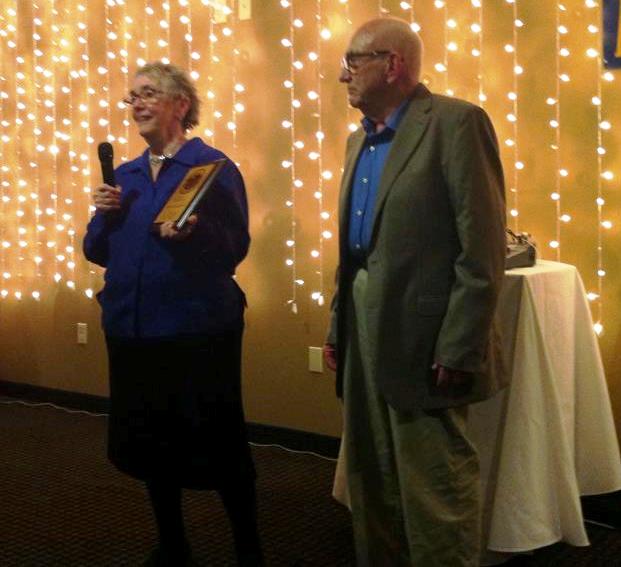 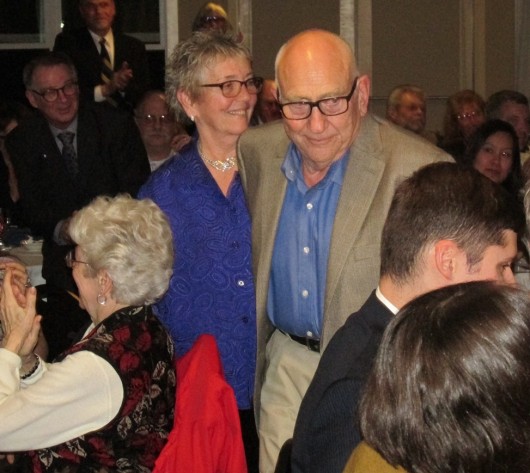 Rich and Kay Andrew move through the audience at the Ketchikan Chamber of Commerce Awards Banquet to receive the Citizens of the Year Award.

The Greater Ketchikan Chamber of Commerce held its annual awards banquet on Saturday, honoring various members of the community for their contributions and service.

The Chamber of Commerce has expanded its awards over the years. Now, in addition to the traditional Business and Citizen of the Year, the Chamber honors youth leaders, community events, community service and entrepreneurs.

The banquet is a feel-good evening full of kudos for people who have worked hard to make Ketchikan a better place to live.

The first award of the night was Outstanding Youth Leader, and that went to Ketchikan Theatre Ballet dance teacher Carol Schafer. Announcing the award was Marc Guevarra, a Chamber board member, who said Schafer always had strong leadership skills, dating back to her time as president of her class at Schoenbar Middle School.

“She did leave Ketchikan for a time to pursue a doctorate in physical therapy, but when she returned, despite injuries from a traffic accident, she resumed teaching at KTB, while 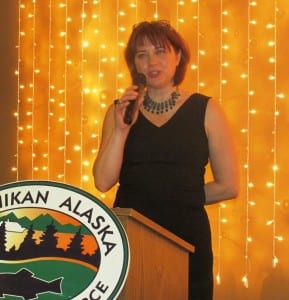 Penny Pedersen accepts the Event of the Year Award for the Monthly Grind. Pedersen is one of the producers of that event, which has been going strong for about 25 years.

The Event of the Year Award went to The Monthly Grind, a local talent show that takes place from fall until spring. It’s been going strong for 25 years, and is always on the third Saturday of the month. Ironically, the Chamber banquet coincided with January’s Grind, and Chamber Board Member Penny Pedersen was the only Grind organizer available to pick up the award.

“I was told that Elizabeth Nelson is announcing this award at the Monthly Grind tonight, so that everybody in the audience can hear about this award that the Chamber has bestowed upon us,” Pedersen said. “It’s a proud moment for me, as a Chamber member as well as a producer of The Monthly Grind.”

The Monthly Grind has inspired similar events on Prince of Wales Island and in Sitka.

The next award was for Outstanding Community Service, and that went to a group that’s dedicated to that activity: Rotary. Ketchikan is home to two Rotary Groups: Rotary 2000 and First City Rotary. They both were honored by the Chamber.

The President’s Award, which honors an outstanding Chamber volunteer, went to Rachel Guyselman.

The Entrepreneurs of the Year were Dr. Marna Hall and her husband, Don, who own and 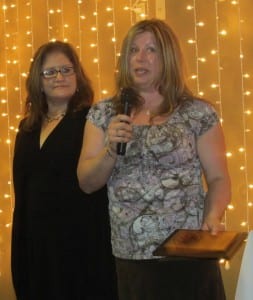 Dr. Marna Hall of Island to Island Veterinary Clinic accepts the Entrepreneur of the Year Award.

operate Island to Island Veterinary Clinic. In accepting the award, Marna Hall thanked the community for the support.

“When Don and I thought about opening up our veterinary clinic, the response that we had from so many people was tremendous,” she said. “And the response that we continue to receive from the people of Ketchikan continues to make us want to strive and grow and be better.”

Pool Engineering received the Business of the Year Award. Chuck and Jan Pool started the business in 1975, and announcer Mary Wanzer said it has been closely connected to numerous infrastructure projects in the region.

In accepting the award, Chuck Pool said his family was the inspiration for the company’s success. 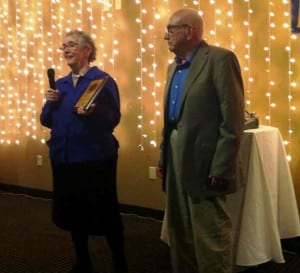 Kay Andrew thanks the community while accepting the Citizens of the Year Award with her husband, Rich.

The big award of the evening is the Citizen of the Year, which for the past few years has been bestowed upon couples. This year’s recipients were longtime residents Rich and Kay Andrew, owners of Annabelle’s restaurant and the historic Gilmore hotel in downtown Ketchikan.

Penny Pedersen announced the award, and noted that the Andrews not only owned local businesses, but commercial fished for many years. They joined the Southeast Alaska Gillnetter Association and the Southern Southeast Regional Aquaculture Association. Later, Kay Andrew was the first woman to chair the Alaska Board of Fish.

“Through it all, they’ve been totally invested in our community,” she said. “For example, last year they helped organize six fundraisers for people here with medical needs. And those programs raised around $125,000.”

When the couple came up to accept the award, Rich Andrew handed the mic to Kay.