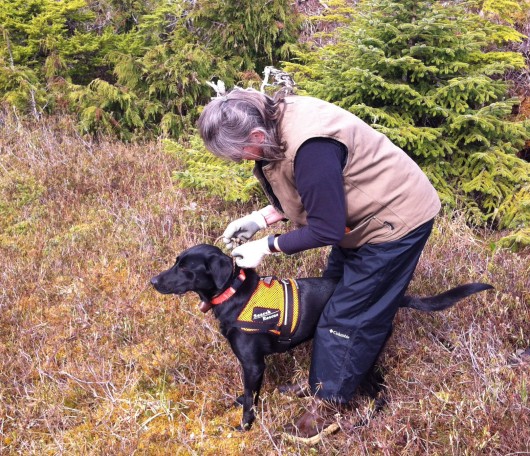 Carol Towne gets Pace ready to search for a volunteer victim, hiding in a muskeg. (Photos by Leila Kheiry)

Ketchikan’s volunteer rescue service recently added a new four-legged team member. Pace has a great nose, tons of energy and the drive needed for what to her is a fun game. For the people she finds, though, it’s as serious as life or death.

Pace is ready to play fetch.

To her, that’s what a rescue is. But, instead of tennis balls, she retrieves people.

A volunteer is hiding among some shrubs on the other side of a large, soggy muskeg. Pace’s owner and trainer, Carol Towne, holds onto the trembling, whining Labrador retriever.

Then, Towne lets Pace go, the whining stops and the only sound is the tinkling of the bell 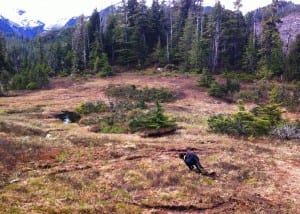 Pace is a little blurry as she takes off across the muskeg to search for a “lost” person.

A four-legged black streak zips across the muskeg, leaving behind a pack of clumsy humans, trying hard but failing to keep up. Pace quickly finds the victims, and rushes back to let Towne know.

Pace leads us to the victim, and her reward is a rousing game of – what else? – fetch, this time with a favorite toy.

Towne has been training Pace since she was an 8-week-old puppy. Just recently, Pace passed her last level of certification. She’s now officially the second certified search and rescue dog for the Ketchikan Volunteer Rescue Squad, a process that took about two years. 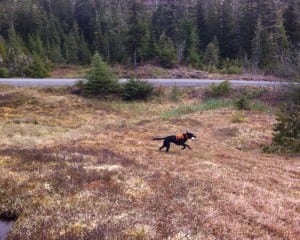 Pace is rewarded for a successful search with a game of fetch.

“Her first test was a trail test. She did that last February,” Towne said. “That’s a half-mile test at night. A victim is hid on one side of the trail or the other. She’s excellent at that. She loves trails. Then we do the obedience. That was the hard part. Being named Pace, she can’t stay still.”

Levi – a black Lab mix – had been the sole SAR dog. He’s about 9 years old, which is close to retirement age. Levi’s owner and trainer is Danelle Landis, the SAR dog team captain. She recently bought a young Belgian Malinois named Ripley, and started training her to take over when Levi can’t do the work anymore.

“She’s just finishing learning the whole runaway/re-find piece, which is the very end of the search,” Landis explained. “So, we hold the dog, the person runs away with the toy, then we let the dog go, they get to the person. When they get to the person, they run back and tell us by using an alert signal, which for her is a bark, which took me more than a month to teach her to bark on command.”

Barking isn’t the problem, of course. It’s barking for a specific purpose that can be challenging.

Boomer is a young, happy pitbull mix, and is a little further along in the training process. 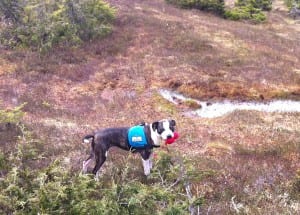 Boomer is a pitbull mix, with about a year of training left before he becomes certified.

Amanda Schuler is Boomer’s owner and trainer. She said she wasn’t sure what to do about her obsessive, overly energetic dog until she learned those traits are highly desirable in a search dog. They’ve been training about a year, and he’ll be ready for his first test this fall.

“He probably has another year of training. For search and rescue dogs, the obedience portion is sometimes the most challenging because they have so much energy and are ready to go, and they have to learn to contain that energy,” she said. “He’s doing well with it, but he has a lot of work to go.”

Schuler is confident that Boomer will do well, at least on the search tests.

“He’s really sharp and he loves playing this game,” she said. “I’m not worried about his 160-acre test, either — his endurance. It’s the obedience stuff that I’m most worried about.“ 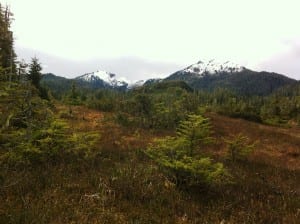 The large muskeg is a great place for training, followed by a group hike.

For the dogs, searching is just plain fun. And, despite the serious need for this kind of work, fun is part of the incentive for their handlers, too.

They get to work with their dogs, hang out with other dog-lovers, and, after training is done for the day, they all have more fun with a group hike through the muskeg.