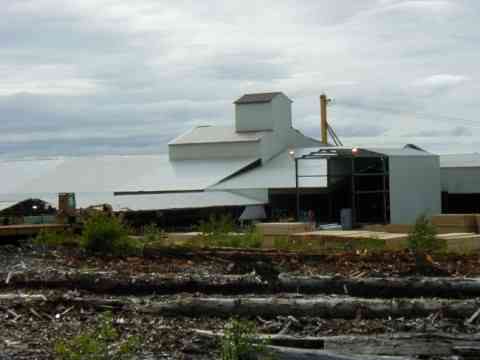 The Viking Lumber Mill on Prince of Wales Island was awarded a contract to log part of the Big Thorne timber sale. But owners say it’s not enough to stay in business past next year. (Photo by Ed Schoenfeld/CoastAlaska News)

Owners of Southeast Alaska’s largest remaining mill say it could close next year. It’s part of an ongoing battle over logging in the Tongass National Forest.

Viking Lumber is a family-owned business in Klawock, on the west side of Southeast’s Prince of Wales Island.

It would have been considered a small-to-medium-sized mill in the peak days of the timber industry. But now, it’s the biggest in the region. 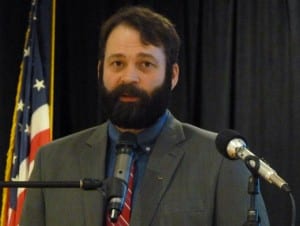 Bryce Dahlstrom of Viking Lumber tells the Southeast Conference about how his mill may close March 15. (Photo by Ed Schoenfeld/CoastAlaska News)

That may change, because it can’t get enough logs.

“The amount of economic timber in the next five years is pretty much non-existent,” said Bryce Dahlstrom of Viking Lumber, addressing a recent meeting of the regional development organization Southeast Conference.

He said the U.S. Forest Service isn’t selling enough old-growth trees for Viking to stay in business. As a result, he said the mill, which 150 people depend on for their jobs, will have to close in about 18 months.

“For the sake of my employees and the employees of the businesses that we support, I would really like to see some action done, and something very drastic. I’m not up here blowing smoke saying we’re going away. We are going to go away, unless something major happens,” said Dahlstrom , who took his case to Congress earlier this year.

Alaska Regional Forester Beth Pendleton points to the Big Thorne timber sale, not far from Dahlstrom’s mill. His business won the bid for that contract and has been logging since 2014.

“So there’s still several years in that multi-year contract remaining for Viking Lumber,” she said.

While smaller than many past sales, it’s among the largest anywhere in the national forest system. 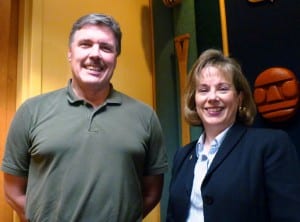 And that’s not all. Pendleton said loggers will have other opportunities.

“We have a number of sales over the next three to five years that we will be offering to industry, both Viking and other competitors, to provide that sustainable supply of timber,” she said.

Southeast Conference, the Alaska Forest Association and other industry supporters say there’s no guarantee that will happen. And if it does, the sales could get tied up in court.

“The federal government will not offer enough timber in the next two years to keep that mill running,” said  Chris Maisch, who runs the state Division of Forestry.

His agency has devised a plan to sell some of its Southeast Alaska timber to Viking.

During a recent legislative hearing, he addressed Senate Bill 32, a Walker administration measure allowing the state to use a different kind of bidding procedure.

“And without the change in that statute, we will not be able to negotiate those sales. They’ll have to go competitive. And in Southeast Alaska, a competitive sale pretty much is guaranteed to go export because the export market can afford to pay more,” Maisch said.

Exported timber is sold in the round, not milled in the state. The bill has made it through several committees, but its chance of passing is not known.

Viking Lumber’s conflict with the Forest Service is tied to the agency’s transition from old-growth to young- or second-growth timber harvests. That’s been supported by tourism and fishing interests that say logging, as it’s been done, damages the environment and threatens their industries.

Andrew Thoms of the Sitka Conservation Society was an environmental representative on an advisory panel that helped draft the transition plan.

“As I’m seeing it, the Forest Service is doing its best to supply timber to the mills in the region. And I think that one of the big problems that we have is that a lot of the economic timber that’s easy to reach on the Tongass has already been cut,” Thoms said.

The Forest Service has been looking for new ways to harvest and process younger trees.

Tongass Forest Supervisor Earl Stewart said the agency remains committed to the transition, expected to take a decade and a half.

“The real intent is to use new market opportunities to develop new markets, develop new products and help sustain the communities across Southeast Alaska,” he said.

But do those new markets preclude the old markets?

“It would be very difficult for me to assess in 16 years what the market availability or the product interest might be,” Stewart said. “I think the key right now is to try to provide resiliency in this system so that you have latitude and flexibility to move and to shift.”

The transition is part of an update to the Tongass management plan, which began in 2014. It’s scheduled to be complete by the end of this year.