A boroughwide sales tax on marijuana of up to 10-percent was introduced Tuesday night by the Ketchikan Gateway Borough Assembly. The Assembly also rejected a proposal to make Rotary Beach an off-leash beach for dogs during limited hours.

The pot tax that originally was in front of the Ketchikan Assembly called for a 5-percent sales tax, which would have mirrored the marijuana tax set by the Ketchikan City Council. The borough’s pot tax would not have applied within the city, making the tax uniform throughout the community.

Assembly Member John Harrington proposed changing that to “up to” 10 percent across the borough. The borough would reimburse the city for its 5-percent tax within city limits, and anything above that would go to the borough.

Unlike the City of Ketchikan, borough sales taxes go in front of voters for ratification. Harrington argued that the borough pretty much has one shot at a pot tax, so making it “up to” 10 percent provides leeway in case the borough needs to increase it without taking it to voters again.

Assembly Member Glen Thompson spoke against the tax, which he said unfairly targets a small group of citizens.

“We should tax sugar. Obesity is just as bad as smoking in terms of health. That’s a

cost to society,” he said. “I just don’t believe in behavior modification through government and I think sin taxes are inappropriate.”

The 10-percent marijuana sales tax was introduced in a 4-3 vote with Thompson and Assembly Members Stephen Bradford and Bill Rotecki voting against it. The issue will return for a public hearing and second vote. If adopted by the Assembly, it would be on the October 4th ballot.

The dog beach proposal was brought by resident Dan Irelan, who said during public comment that he’s been bringing his dog to Rotary Beach – also called Bugge’s Beach – for years without a problem until borough Animal Control started enforcing the leash law.

“I’m just advocating for some sort of law, some place where we can take our dogs off leash without feeling criminal,” he said.

Irelan said the current Ketchikan Dog Park is too small. That dog park is under development, with a larger space planned.

Sarah Harney also spoke during public comment against the idea of allowing dogs to run off leash at Rotary Beach.

“There have been times that my children have been pushed into the water by dogs, primarily because owners are throwing balls into the water, or sticks,” she said. “We’ve countlessly times had to call dogs off our personal property. I’ve actually had a cooler peed on before. I know that the poop issue has been brought up. There have been many times that I myself and my children have been subjected to sitting in and unfortunately playing in dog feces.”

Bev Davies suggested a compromise: Allow dogs off leash on the beach during certain times of the day when it’s less popular for families.

That’s the compromise that Assembly Member Harrington – who also is a member of the animal protection advisory committee – proposed to the Assembly.

Thompson, though, said he’s concerned about the safety risk – and the liability – of allowing dogs to run on a public beach.

“No one that I’ve seen so far has brought up Allison Brown’s child that was attacked on Rotary Beach and required medical attention,” he said. “That was by a dog that was off leash. That was not the first time, and it was not the last.”

Thompson suggested that further development of the dog park would be a solution.

Assembly Members Alan Bailey, and Rotecki agreed, but Assembly Members Felix Wong, Harrington and Bradford wanted to see what kind of compromise borough management could come up with.

The motion to move forward with a designated time for dogs to run off-leash at Rotary Beach failed in a 3-4 vote. 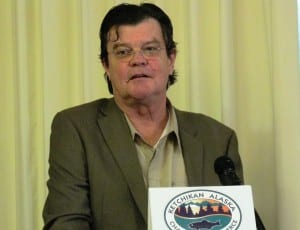 The Assembly also heard an update from OceansAlaska manager Ron Zebal, who said that the shellfish hatchery had some recent financial challenges, partly because of a die-off of oyster seed they hoped to grow over the winter and sell.

“What really killed us, what really hurt us in terms of cash flow was that the sets that we did later in summer last year and the early fall, because of the problem that we did not anticipate, which was the calcium deficiency, pretty much was a 100-percent wipeout,” he said.

Zebal said state regulations also have made it unprofitable to grow geoduck seed, which was another part of the business plan. He said state biologists have told him that OceansAlaska must maintain 100 animals to spawn, in order to provide genetic diversity. To ensure that threshold, Zebal said, they would need to keep about 500 adult geoducks, and the resources to do that are too expensive.

“The algae demand, the hot water demand would kill us,” he said.

Zebal said the hatchery is surviving on oyster seed sales, but there will be an upcoming cash-flow problem. He said they are seeking a bridge loan to carry them through those months.

OceansAlaska was granted a $600,000 loan from the borough in 2014. The funds are to be dispersed in installments over five years, and then paid back over 25 years, starting in 2019.

In the interest of full disclosure: KRBD’s Leila Kheiry is the chair of the Ketchikan Dog Park board.