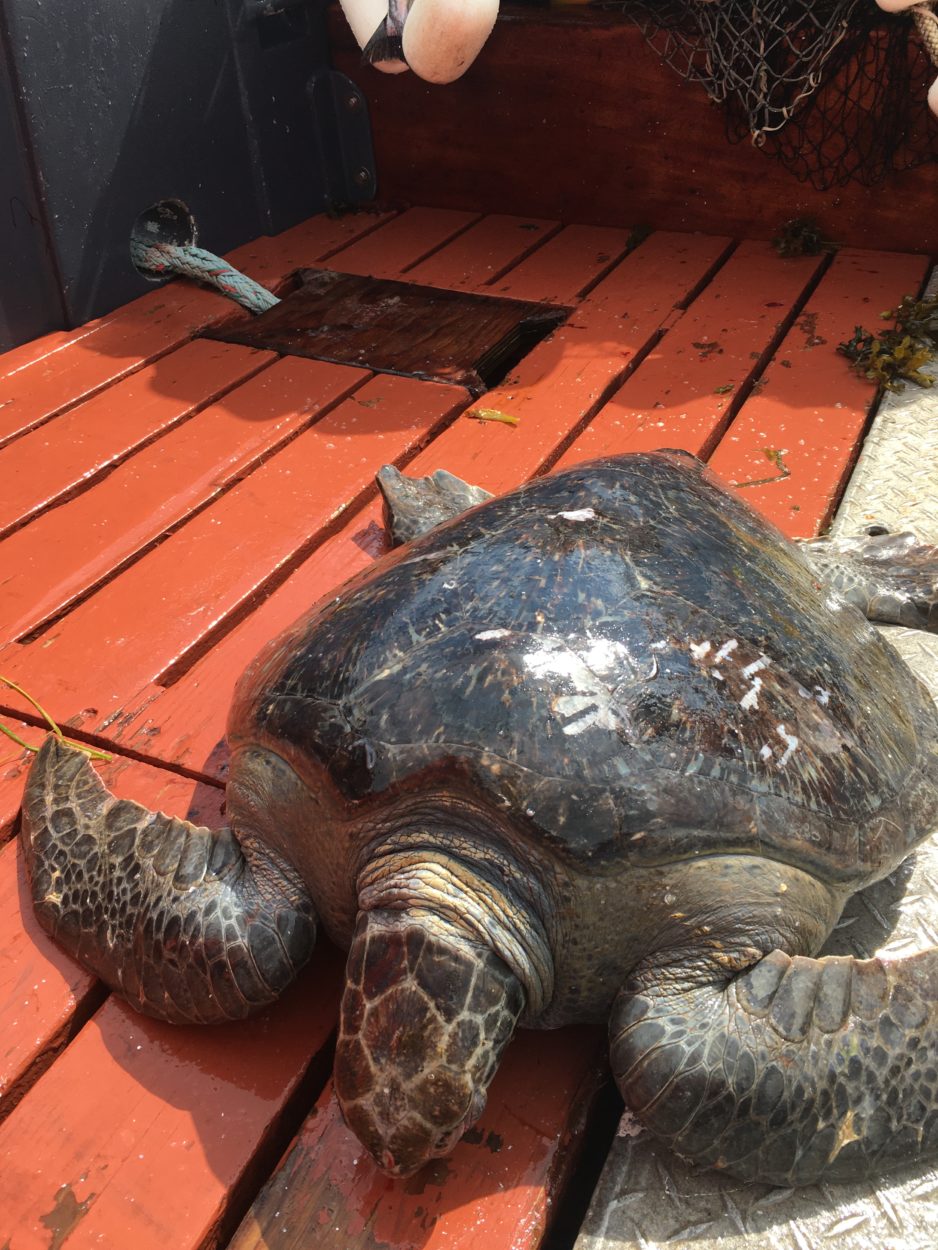 An east Pacific green sea turtle waits on the deck of the seiner before being returned to safer waters (photo courtesy of Jes Boyd).

A fishing crew near Prince of Wales Island recently made an unusual catch. This not only excited the crew, but has also caught the attention of marine biologists.

The crew of a seiner was setting their net on August 5 south of Prince of Wales Island when they noticed a small sea turtle swimming near the boat. To keep the animal from getting caught in the net, crew member Ben Dolph reached over and pulled it from the water. 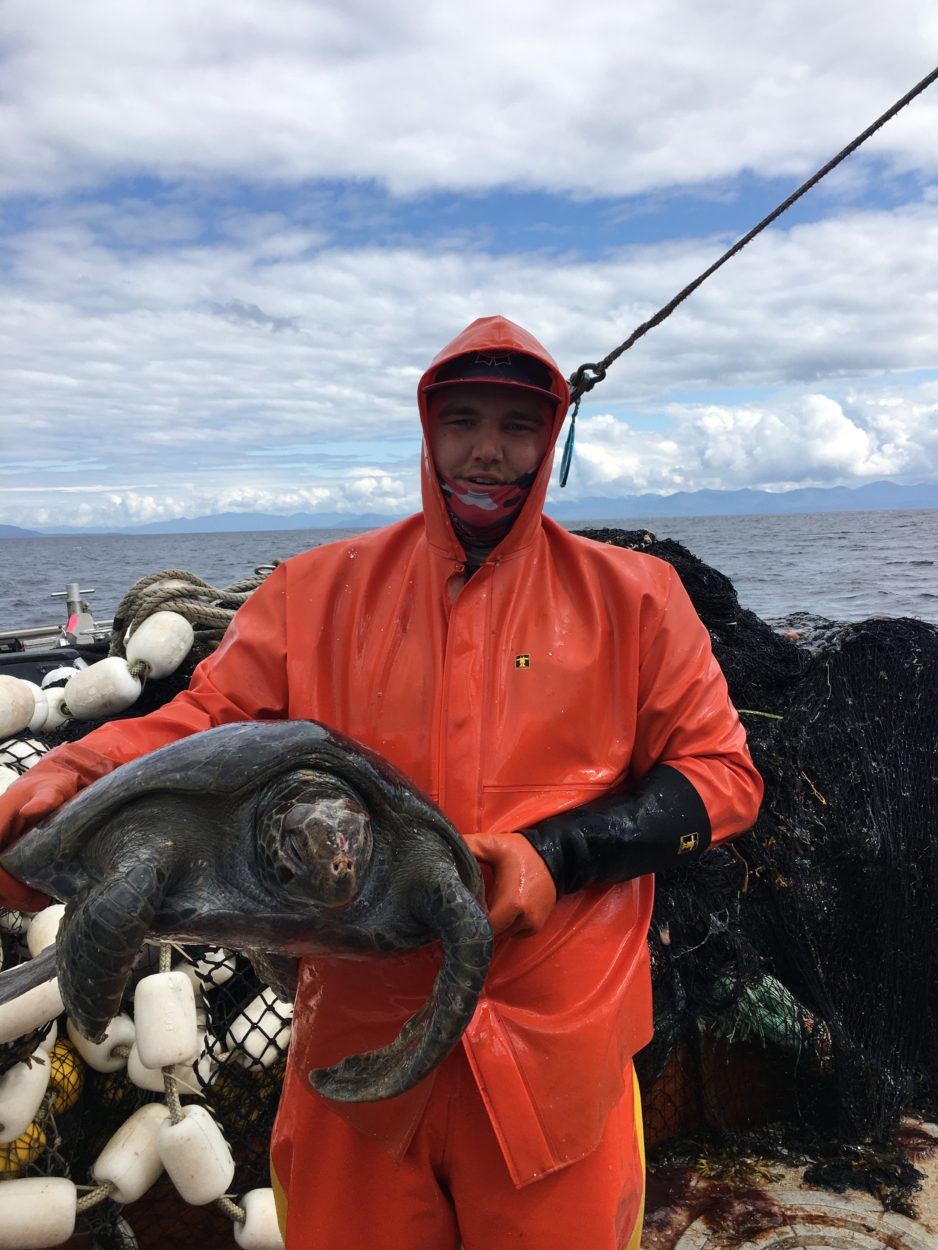 Fisherman Ben Dolph and the green sea turtle he rescued before it could get tangle in a net (Photo credit Jes Boyd).

Dolph says the turtle hissed at him as he picked it up. He estimated it weighed about 50 pounds. A crewmember sent photos to a relative who is a biologist.  It was identified as a Pacific green sea turtle, a federally protected species.

Barbara Mahoney is a biologist with the National Marine Fisheries Service in Anchorage. She says turtles are cold-blooded and usually prefer warmer water. So it’s rare to encounter one in Southeast Alaska.

“Their northernmost waters would be California going into the Washington Area. But some turtles get caught in the current.”

Mahoney conferred with fellow biologists and confirmed it is specifically an east Pacific green turtle, also known as a black turtle. She says they have nesting beach strongholds in Mexico, Costa Rica and the Galapagos. Mahoney says it’s hard to determine, but this turtle likely came from Mexico.

Mahoney says authorization is needed to handle or move a green sea turtle because of its listing under the Endangered Species Act.  She says NMFS should have been contacted. The fishing crew seemed well-intentioned. 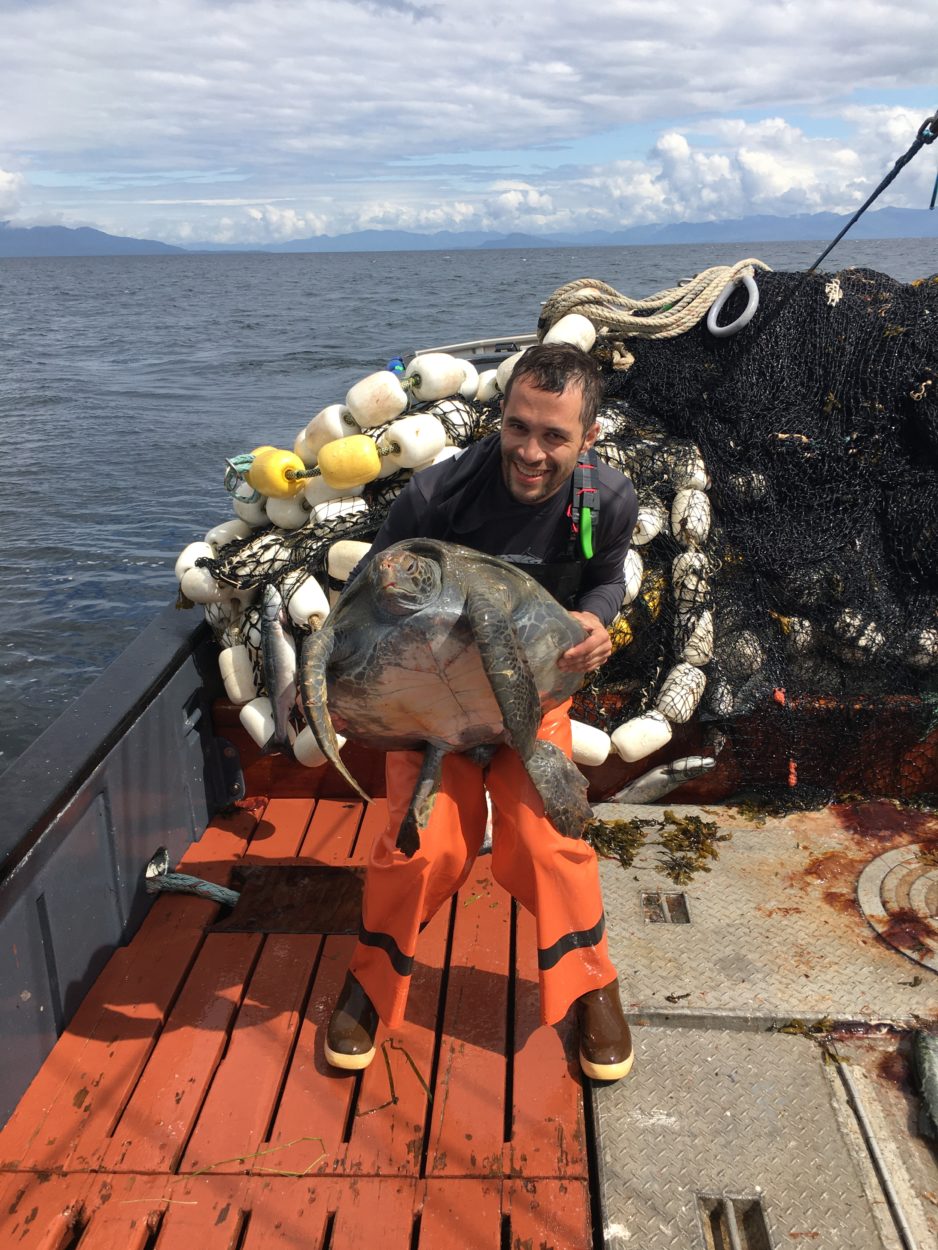 “But it would have been good if they contacted NMFS after the fact as well to explain their operation or their process of what they did and why they did it.”

Dolph and fellow crewmember Jes Boyd say details about the incident, including location, were reported to the Alaska Department of Fish and Game.

After finishing the set, crew member Boyd says they moved out of the area to release the turtle in safer waters.

“The tide was heading south so we went south of where all of the fishing boats were and released him there.”

Both Boyd and Dolph say they’ve caught many unusual things while fishing, including barrels, objects from Japan and even a vacuum cleaner, but this was the first time either has encountered a turtle.

Boyd even took a video of the turtle’s release.

Both Boyd and Dolph say seeing the turtle was shocking and amazing and something they’ll never forget.