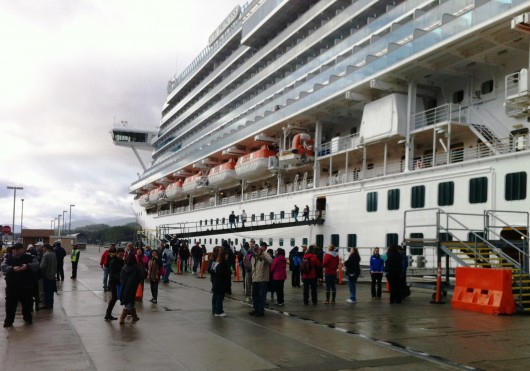 Tourists disembark from the Ruby Princess in 2015 in Ketchikan. (KRBD file photo).

The Centers for Disease Control pushed to extend an order barring large cruise ships from sailing from U.S. ports until February 2021 over coronavirus concerns.

But the agency was overruled by Vice President Mike Pence. That’s according to a report from the news outlet Axios that cites two unnamed sources with knowledge of the conversation.

That coincides with the planned end of a voluntary suspension instituted by cruise industry group Cruise Lines International Association. The CDC’s no-sail order was set to expire Oct. 1.

The order followed outbreaks on cruise ships in the early days of the pandemic.

More recently, Norwegian Cruise Line Holdings and Royal Caribbean Group have submitted recommendations to the CDC that they say would protect passengers and crew from COVID-19. Those include testing, temperature checks, mask-wearing and capacity limits, among others.

The lines also recommend shorter voyages that focus on cruise line-owned and operated destinations, like private islands, and limiting shore excursions in other ports to cruise line-sponsored activities.

The state of Alaska also submitted recommendations to the CDC highlighting the importance of visitor spending to the state’s economy. The state also recommends passengers obtain medevac insurance and emphasizes that crew and passengers must follow state and local health protocols.

Federal law requires that Alaska cruises from the U.S. stop in at least one foreign port. That’s usually Victoria or Vancouver, British Columbia.

Canada’s ban on cruise ship sailings also expires October 31, though it could be extended. Ships ordinarily start calling on Alaska ports in April.