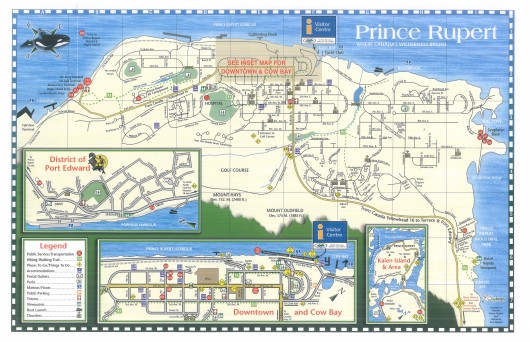 The mayor of Prince Rupert, British Columbia, passed through Ketchikan recently, and took the opportunity to meet with representatives of the local business community.

Jack Mussallem is serving his fourth term as mayor of that Canadian port town. His presentation at the Ketchikan Chamber of Commerce office was low-key, but he’s clearly a big fan of his community and its economic development efforts.

Mussallem said one reason Prince Rupert has been able to recover from the closure of its pulp mill in the late 1990s is its location, with its connection to the Canadian railroad and its deep-water port. One big asset is the Prince Rupert container port.

“That container port happens to be the most efficient container port on the West Coast of North America,” he said. “When ships come in to unload, by the time they’re loaded and ready to leave, a third of what they’ve dropped off has already left the container port, and is on its way to the Midwestern United States, Chicago and Nashville, and gets there in less than 100 hours.”

That strategic location helped with the development of Prince Rupert’s grain transfer facility, and wood pellet and coal terminals. Under development now is a liquefied natural gas export facility.

He said tourism also is an important factor in his community’s economy. The B.C. Ferry system is well used by visitors, who make a big circle by driving or taking the train to the coast, then riding the ferries to visit B.C. islands.

Mussallem said the provincial government wants to cut ferry service, which could hurt the region’s tourism. He wants to improve ferry service by cooperating with Alaska and Washington State ferry systems.

And speaking of the Alaska Marine Highway System, Mussallem said additional trips between Prince Rupert and Ketchikan would benefit both, especially for traveling sports teams.

“In the wintertime, there’s basketball players that can go back and forth, swim team participants that can go back and forth,” he said. “In the summer, we’ve got a lot of young kids that play soccer, I understand they’re starting to play soccer here. And of course, I’ve had calls about facilitating baseball teams. You try to get a Beaver on our side of the border, it’s $1,600. I tell them I don’t want to buy the plane, I just want to ride it.”

Despite all the economic development going on in Prince Rupert, its former pulp mill facility remains unused for now. But, Mussallem said they’ve had some proposals for the site, including another grain transfer facility.