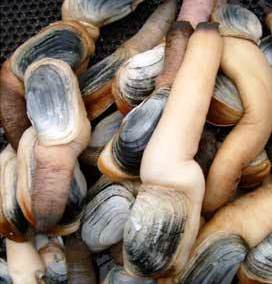 A March 21 trip to China resulted in potentially positive news for Southeast Alaska’s geoduck clam fishery. During that trip, National Oceanic and Atmospheric Administration officials met with counterparts in Beijing, and talked about toxin testing methods.

In a conference call Friday with staff from Sens. Lisa Murkowski and Mark Begich’s offices, a NOAA administrator said that the U.S. officials came away from the March 21 meeting optimistic about resolving the dispute, and eventually lifting the ban.

China is the primary market for geoduck clams, but halted imports of the shellfish in December. Chinese officials claimed they found high PSP and arsenic levels in geoducks from Washington State and from dive areas around Ketchikan, although the clams had been tested in the United States and deemed safe.

PSP, or paralytic shellfish poisoning, is caused by eating shellfish contaminated with certain kinds of algae that produce toxins.

According to Begich’s office, Chinese officials told the NOAA representatives that they were satisfied with Alaska’s PSP testing methods. But, more work is needed to satisfy Chinese concerns about arsenic.

Both of Alaska’s senators say they’re pleased with the results of the meeting. Murkowski’s office added that the “likely resolution timeline is some point in June.”

In the meantime, geoduck dive fishing in Southeast resumed a couple of weeks ago after processors found additional, smaller markets for the clams.