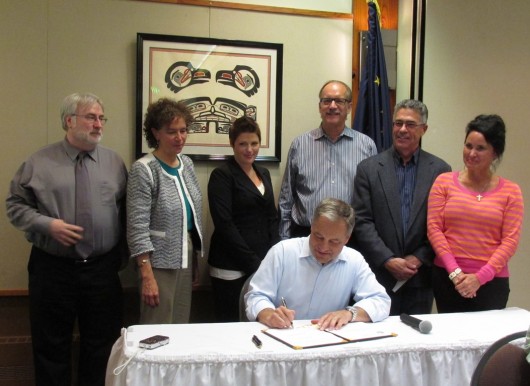 Gov. Sean Parnell was in Ketchikan on Monday to sign into law Senate Bill 99, which allows the Alaska Industrial Development and Export Authority to issue bonds for two Southeast Alaska mining projects, plus a loan for Sitka’s Blue Lake Hydroelectric Project.

While the legislation received support from area elected bodies and business interests, a regional environmental organization questions the wisdom of investing state money in “risky” ventures.

With a flourish of a pen, Parnell put his stamp of approval on up to $150 million in bonds to help finance the Bokan-Dotson Ridge rare-earth mine, plus the Niblack gold, copper, zinc and silver mine – both located on Prince of Wales Island.

“Today I have the privilege of signing SB99, which is about creating new opportunity throughout the state, but primarily in this region,” Parnell said

Senator Lesil McGuire, an Anchorage Republican and the bill’s sponsor, also attended the signing. Parnell asked her to talk about its impacts. She said the bill is a creative way to help finance projects that will benefit Alaska.

“Ninety-five percent of those rare earth minerals have been produced and exported fromChina,” she said. “We want to be, in Alaska, the ones that take their place. We want that 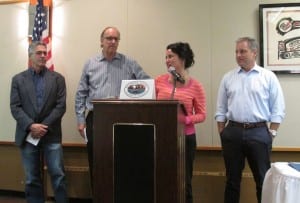 for national security reasons; we want it because we want the jobs.”

Ken Collison is the CEO of Ucore, the Canadian-based developer that’s exploring the Bokan project. He also spoke during the Chamber event, and said the support provided by state and local governments is good for his company when it comes to attracting other investors. Collison said it’s also good for the state; it shows that Alaska is open for business.

“This is a tough time in the mining business. It’s a natural resource business, so prices go up, prices go down. Right now, prices are down. And to be able to show that we have the kind of support that we have in the State of Alaska is huge,” he said. “We’re going to have a really active program on the site this summer – we’re going to spend a couple of million dollars on some drilling programs and some other work. Without this support, it would have been a lot more difficult for us to raise the funds to do this kind of work.”

Not everyone is happy with the prospect of using state money to finance the mining projects, though. Guy Archibald of the Juneau-based Southeast Alaska Conservation Council said it’s risky to invest the public’s money in these two Prince of Wales mines.

“If these mines are unable to make it economically, and they declare bankruptcy, then the state of Alaska is just going to be in line with all the rest of the creditors, and they may only get paid back pennies on the dollar,” he said.

Archibald said that the loan process also sets up a conflict of interest, because the state is an investor as well as the regulatory body for permits.

“How is Alaska supposed to enforce their permits when that enforcement may affect the mining companies’ ability to pay back the loan?” he said. “Congressman (Don) Young wants to build a road to the mines, and now Governor Parnell wants to lend them money to build the mines.  What will they want next, a parade?”

The road he mentioned is a proposal by Alaska’s congressional delegation that would allow a road to both mines through federally designated roadless sections of the Tongass National Forest.

Archibald also is concerned about the potential environmental effects of both mines. He said waste rock and tailings from the Niblack mine could require perpetual water treatment, and that the Bokan mine has radioactive material.

Both projects are still in the exploratory phase.