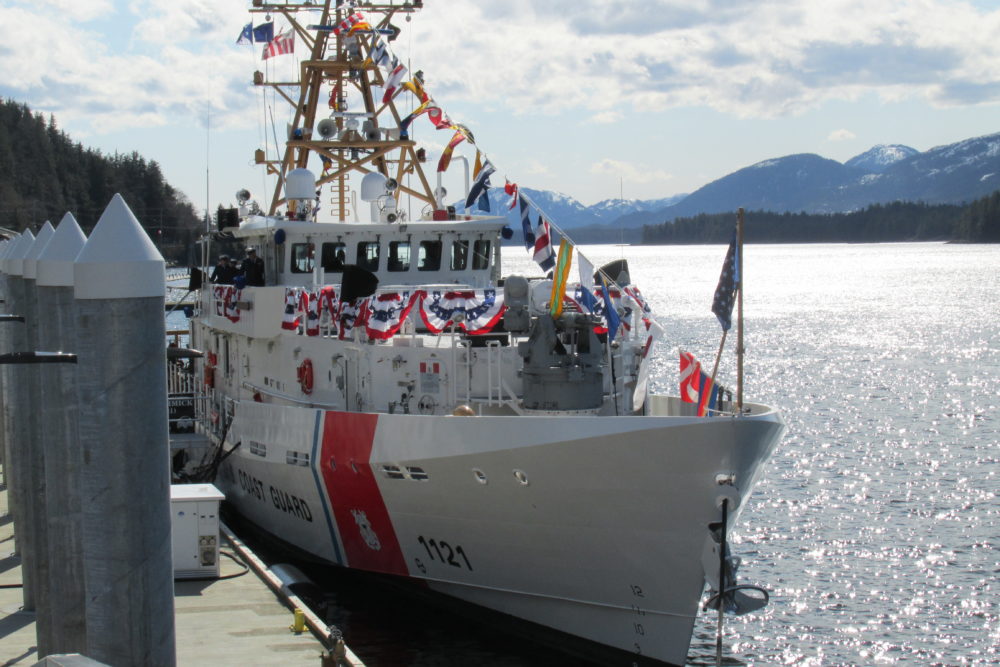 A commissioning ceremony was held in Ketchikan Wednesday for the U.S. Coast Guard cutter John McCormick. The 154-foot vessel is the first of six fast response cutters that will homeport in Alaska, and the first to be homeported on the Pacific Ocean.

With warm temperatures and sunny skies, several speakers commented that it was a perfect day for a commissioning. The Ketchikan High School band, accompanied by members of 9th Army Arctic Warriors Band from joint base Elmendorf – Richardson, provided pre and post ceremony music.

Built under the Coast Guard’s Sentinel- class program, the John McCormick is named in honor of a boatswain who received a Gold Lifesaving Medal for a heroic rescue on the Columbia River Bar in 1938. In attendance were members of the McCormick family, and descendants of Robert Bracken, the man McCormick rescued. 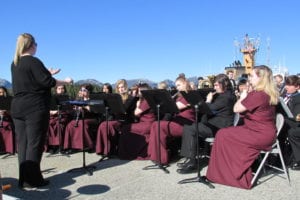 The invocation was given by Chaplain David Alexander.

“…For this plank owning crew of the fast response cutter John McCormick, we ask nothing more at the beginning than that you give them the same courage, and willingness to sacrifice as their namesake. Give them strength in their arms and their backs, in their minds and their reflexes, so no challenge at sea is too great for them, especially when they are banded together.”

“Alaska has more coastline than all the other states combined. And it is a fitting honor to homeport the John McCormick in the 17th Coast Guard District, in Ketchikan, and for this vessel to defend our nation’s interests from right here in Alaska.”

Rear Admiral Michael McAllister, commander of the 17th Coast Guard District, says the John McCormick already has accomplished a number of firsts, including the assembly of its first crew, the first transit by any fast response cutter through the Panama Canal, and the first West Coast port call by that type of cutter. McAllister says the vessel has many more firsts ahead.

“Including your first patrol, your first fisheries boarding, your first search and rescue case, all in service to Alaska. But before you get to those, you’ll have another first today, as you stand your first watch as a commissioned cutter here today.”

Admiral Charles Michel, second in command in the Coast Guard, spoke about the ship’s motto, “Stewards of the Last Frontier.”

“And it’s emblazoned on the ship’s seal, and it could not have been better chosen. It captures the cutter, the culture, the crew, all so important to what we are celebrating today.” 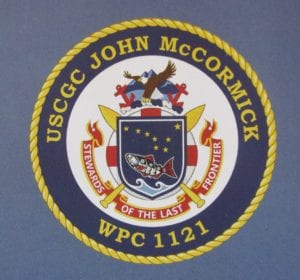 Seal of the John McCormick.

Michel says Alaska is one of the most remote and challenging areas of responsibility for the Coast Guard, and it’s fitting that the first fast response cutter on the West Coast is in Alaska.

“And this ship behind me has been specifically designed to meet these most challenging conditions. To take head on all that Alaska has to offer. The fast response cutter is a true game changer for the United States Coast Guard and for the citizens of Alaska.”

Admiral Michel then officially placed the John McCormick in commission, and handed over command to Lieutenant Michael Moyseowicz.

“On behalf of the President of the United States, I hereby place in commission United States Coast Guard cutter John McCormick. May God bless and guide her and all who sale in her. 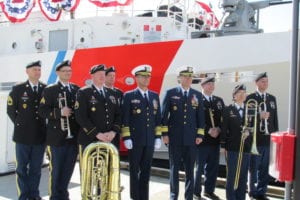 Admiral Charles Michel and Rear Admiral Michael McAllister pose in front of the John McCormick with members of the Elmendorf-Richardson Army band.

Each ship has a cutter sponsor who maintains a relationship with the crew and participates in ceremonies. Linda Jarmer, granddaughter of John McCormick, is the cutter’s sponsor.

“I know that he would be honored to see his legacy continue living on within the heart of this crew and all the future crews. He will be with you every step of the way.”

The ceremony continued with the crew reporting for duty and the raising of the admiral’s flag, and concluded with a benediction by Chaplain Alexander while the Army band played the naval hymn, “Eternal Father.”

“…Cause the seas to flatten and calm at their approach. Cause the sun to shine warm on their faces, coming through the famous cloud cover of Southeast Alaska. Grant them fair winds and following seas, and hold them all in the palm of your hands. We ask these things in faith and we say together. Amen.”

The Coast Guard is offering tours of the John McCormick this Saturday, April 15th, from 10 a.m. to 1 p.m. Come to the lower base no later than 12:30 to check in and allow time for the tour. Be sure to bring a photo ID.