Legislation that dials back rate increases at Pioneer Homes has been signed by the governor. Last year’s rate hikes more than doubled rates for some residents at Alaska’s six state-run long-term care facilities.

Brad Rider spends a lot of time visiting his parents at Juneau’s Pioneer Home. Before the coronavirus led administrators to restrict visitors, he says he stopped by just about every day.

“The other residents, the people that work there, they all basically become family,” he said in a phone interview Friday.

But then Gov. Mike Dunleavy announced a $12.3 million cut to the Pioneer Home system. 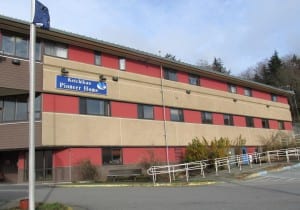 The Ketchikan Pioneer Home is one of six in Alaska caring for older residents. (Photo by KRBD)

Clinton Lasley, then the director of the Pioneer Home system, sent a letter to residents last February saying the state’s fiscal crisis required the department to, essentially, earn what it spends.

He told a House committee last year that one way to do that was to charge more to people who could afford to pay more.

The rest would be covered by payment assistance outlined in state law.

“Then it would be a truly needs-based system and we’re not subsidizing those individuals for example that may have the ability to pay for the services,” Lasley said last April.

But that meant big rate hikes for people like Brad Rider’s parents.

Rider says at one point, the state advised residents to look to public assistance — which he says he found insulting.

“They see that as a handout — they’ve worked their lives saving every nickel and dime they have,” he said.

And even then, qualifying for payment assistance would mean his parents had to pay full price until their savings were drained.

So Rider was among those who took the state to court. He, his parents and Ketchikan Pioneer Home resident Eileen Casey filed a class-action lawsuit to block the rate hikes.

State legislators were working on a parallel track. Anchorage Democratic Rep. Zack Fields introduced a compromise bill to slow the rate of increases for residents and their families.

We heard heartbreaking testimony when the rates were raised that the higher rates were going to break up families and force families to send their elderly loved ones down to the Lower 48,” he told KRBD Friday. “I mean, those are horrible decisions for anyone to have to make.”

Fields acknowledges that rates had to rise somewhat — they hadn’t kept pace with costs. But he says when rates did get raised, they often jumped by quite a bit.

“Basically, over the past decade, you’ve had somewhat volatile rates because they were adjusted irregularly through the regulatory process,” Fields said.

And the bill ties rates to Social Security benefits. Those increase every year with what’s called a “cost of living adjustment.”

“This bill establishes a much more predictable process where the rates are going to maintain the same real value by being linked to inflation,” Fields said.

He says he hopes that’ll offer residents some stability. He says Ketchikan independent Rep. Dan Ortiz and Republican Senate President Cathy Giessel were instrumental in shepherding the bill through the legislature amid the COVID-19 pandemic.

Though the bill was initially opposed by four lawmakers in the House, final passage was without opposition in both chambers. Dunleavy signed the bill on April 29. A spokesman for the governor didn’t offer any further comment.

Juneau’s Brad Rider says that even though his parents’ rates will still be higher than they were before last year’s hike, he says he’s satisfied.

“I think the outcome was absolutely wonderful. I don’t think we could have done any better,” he said. “Our seniors definitely deserve this, and this is a wonderful end.”