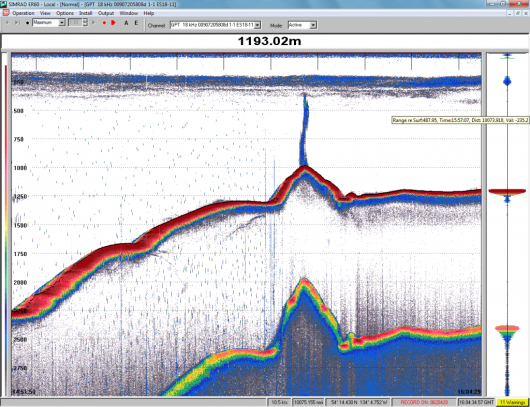 A screen shot from a scientific sounding device shows the newly-discovered volcano and its plume of methane gas. The lower line is an echo, not another volcanic cone. (Image courtesy Canadian Geological Survey)

Scientists have found another underwater volcano in Southeast Alaska waters. And this one is active.

About two years ago, geologists studying an ocean channel near Ketchikan spotted something unusual. It was a submerged volcano, about 150 feet below the surface.

It was dormant. The experts estimated it hadn’t erupted for about 10,000 years.

“Nothing like that had been mapped in the area before, so we knew then that we had discovered something new,” says Gary Greene, a marine geologist working with the Sitka Sound Science Center.

He and a Canadian counterpart found the volcano Sept. 23 during a study of the Queen Charlotte-Fairweather Fault System. That’s been the epicenter of some recent earthquakes.

“We had just completed some survey work and we modified our line to go to another place to look. And as we were transiting, we came across this big plume and this big cone where the plume was coming out of,” he says. 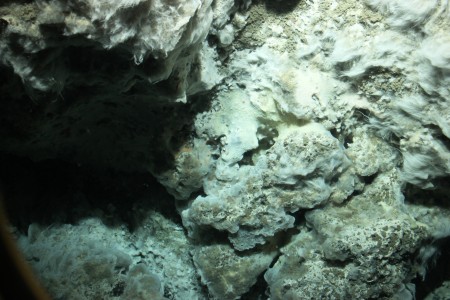 This photo taken under 3,000 feet of water shows the newly-found volcano’s vent. Thread-like bacteria and a white coating of minerals precipitating out of solution are visible. (Photo courtesy Stuart Nishenko)

The plume, made up of methane gas, was being released by a volcanic vent about 3,000 feet below. It stretched up about two-thirds of the way to the ocean’s surface.

But Greene says there was no fresh lava — or anything else to worry about.

“We worked over the vent, right over the vent. And we’re still around to tell about it. So I think it’s probably OK for mariners,” he says.

He says the discovery sheds light on the workings of the Queen Charlotte-Fairweather Fault System, which is offshore British Columbia and Southeast Alaska.

It’s where a huge, moving chunk of the Earth’s crust, called the Pacific Plate, rubs up against the North American Plate.

“It means that this fault acts as a conduit to deeper in the Earth to places where either magma or fluids that are heated by magma or geothermally heated at depth can migrate up through the fault to the surface,” he says.

“It’s also helping direct future research that will help define the significance of understanding the fluidity of that fault,” she says.

Lava and other volcanic fluids lubricate faults, lessening the chance of sudden movement. But that can increase pressure on other areas along the fault, forcing them to jerk forward, causing earthquakes. 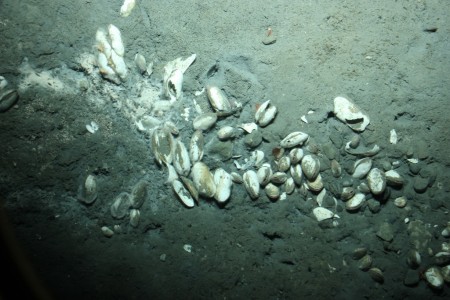 Greene says the new volcano was found as scientists investigated another underwater hazard.

“This is an area that had had indications that there were failures occurring on the slope here. And large failures, that is, large landslides that may generate tsunamis,” he says.

The new volcano is not alone. Greene says the study found others nearby, but none

Several other venting volcanos have been found along the fault in recent years off the shores of British Columbia.

The black and white profile should be credited to Stuart Nishenko, who took the picture on board the John P.Tully, the Canadian Coast Guard Vessel. The other photos can be credited to the Canadian Geological Survey as it was their equipment that collected the photos. You can say that Principal Investigator H. Gary Greene provided the photos to you. Thanks for asking.