As the partial federal shutdown enters a fourth week, federal workers throughout the United States are staying home, unpaid. Or – in the case of “essential” employees — are going to work but still aren’t getting paid.

Depending on how much savings a family has, that means no money for bills, the mortgage, groceries.

Here’s a report on one Ketchikan family’s shutdown story – and how the community is responding with kindness and understanding.

Jenn Tucker’s husband works for the Transportation Security Administration in Ketchikan. He is an “essential” employee, so he’s going to work every day.

But, there’s no paycheck. There hasn’t been one for a while and there’s no prediction about when one will arrive.

“It’s not that we don’t have money; it’s that I need to horde our money,” she said. “I can’t have money going out because I have no idea when more money is going to be coming in.”

Money needs to be saved for daily essentials, like groceries for a family of five, gas to ferry three kids to various activities, heating oil.

So, Tucker recently made the rounds of local bill collectors.

“And, really was prepared for a lot of pushback,” she said. “You don’t go to a bill collector thinking that when you tell them, ‘Hey, I can’t pay you!’ that they’re going to be understanding. But everybody I went to was really understanding. And compassionate.”

Ketchikan Public Utilities’ representative, for example, was so empathetic, “I walked out and had to like, gather myself, because I was so emotional over the fact that she was so kind to me.”

Tucker said she had a similar experience at GCI. They didn’t even ask for documentation.

“It wasn’t official. It was very human. It wasn’t a process that I felt like a number. I really felt like a human being,” she said. “And even Wells Fargo, which – they don’t have the best reputation in dealing with people – but when I called them, it wasn’t like ‘OK, we’ll suspend things until this is over, let us know’ like everybody else, but they were like, ‘We have programs, we have ways to work with you,’ and again, they treated me like a person and not a number.” 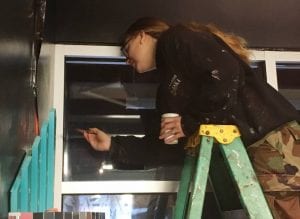 Jenn Tucker paints inside the Tongass Historical Museum, one of the part-time jobs she was offered to help her family get through the partial federal shutdown. (KRBD photo by Leila Kheiry)

Tucker said the community has shown support in other ways. She normally works seasonally during the summer cruise months and then focuses on her family’s needs during the winter.

But with the overriding need for cash, Tucker is taking on odd jobs that people are happy to offer.

“In fact, I’m starting to get more work than I can actually do, which is wonderful,” she said. “You tell one person you need something and all of a sudden, this community of Ketchikan just pours in.”

She said many businesses, small and large, are stepping up to help; and friends have definitely shown the love.

“It’s actually a little awkward for me. I’m not normally a receiver,” she said. “My family, my husband and I, we work hard. We don’t want handouts. But there’s all this love coming in, you can’t not accept it. But it is an awkward situation.”

Because it’s so much easier to give than receive.

“I’m happy to help anybody but asking for help is really hard for me,” she said. “So, yeah, it was a day that was so difficult, but so uplifting.”

Out of concern for her husband’s job, she didn’t want to talk about the politics surrounding the shutdown. But, Tucker was willing to address the frustration.

“This is a really stressful thing. It’s always there in the back of your mind,” she said. “We’ve done everything right. We pay our bills. We do those things. It would be really great if the government could figure out how to do that, too.”

“You don’t get to not pay your bills just because you’re in an argument with your spouse,” she said.