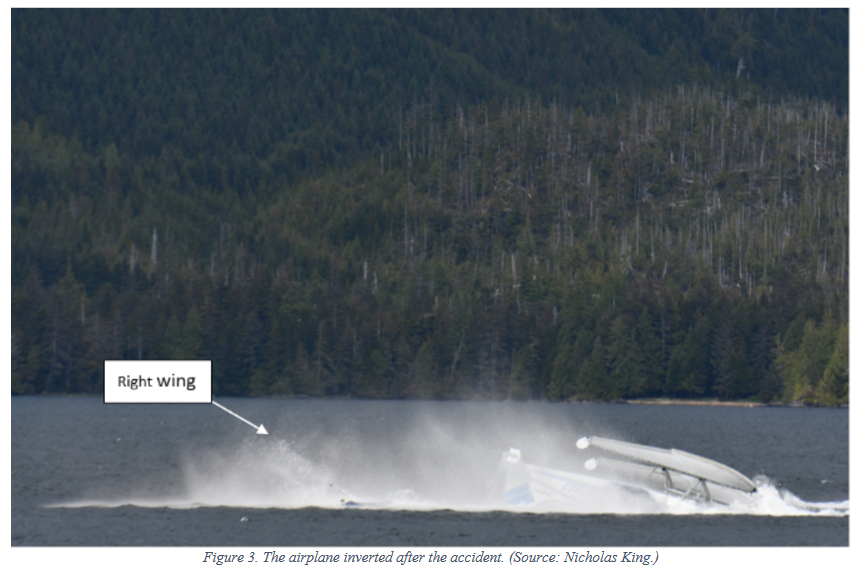 This image from the National Transportation Safety Board’s factual report shows the Taquan Air DeHavilland Beaver overturned after landing near Metlakatla on May 20, 2019. (via NTSB)

Federal investigators have released a trove of new information about a 2019 fatal Taquan Air crash near Metlakatla. But they have yet to identify what caused the floatplane to nose dive into the water, killing the two people on board.

Witnesses told investigators that wind appeared to push the 1959 DeHavilland DHC-2 Beaver to the right as it touched down at the seaplane base near Metlakatla. It skipped like a stone before one of its floats dug into the water, causing the plane to overturn and partially sink. 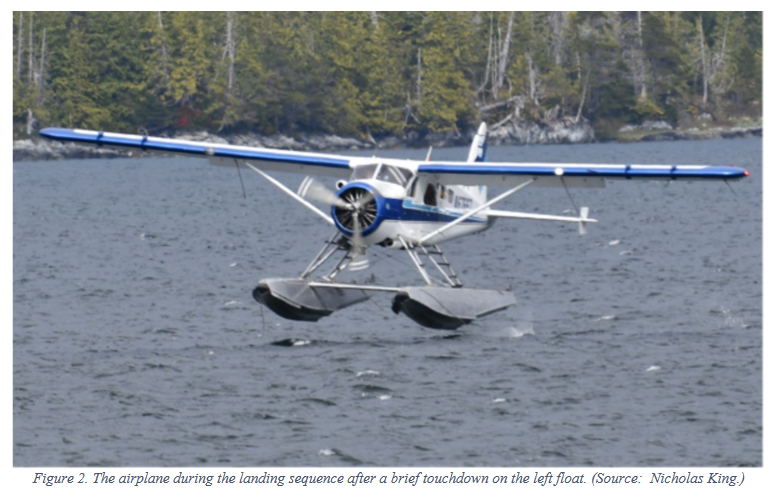 This image shows the DeHavilland Beaver as it landed in Metlakatla. (via NTSB)

Clint Johnson heads the Alaska regional office of the National Transportation Safety Board. He said investigators spoke to witnesses, employees of the Ketchikan-based airline and did their best to piece together what happened on May 20, 2019.

“We look at three main areas — we always say, you know, man, machine, environment,” Johnson said. “Man being the human portion, the human interaction, machine being the mechanical portion — did something break? — and then in this case, the environment, which is obviously wind conditions.”

Investigators didn’t turn up any mechanical issues with the aircraft. But Taquan employees tasked with training new pilots reportedly told investigators that winds near Metlakatla can be “unpredictable and challenging.”

The NTSB’s factual report said that as the Beaver came in on approach to Metlakatla, the wind shifted directions in under a minute. That turned the six-knot headwind into a seven-knot tailwind. Investigators say supervising pilots told them Taquan did not teach or advise tailwind landings because of the risks involved. That’s because, according to the report, the faster the landing, the higher the risk of nosing over. 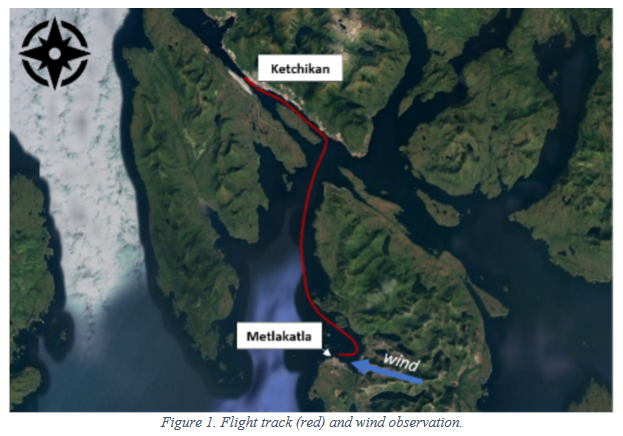 This graphic shows the route of the aircraft on May 20, 2019 and the wind following a rapid shift. (via NTSB)

The pilot, 51-year-old Ron Rash of Harrisburg, Pennsylvania, didn’t have much Alaska flying experience. He’d just completed training about two and a half weeks before the crash and had logged 22 hours on that type of aircraft, according to the report.

This Taquan Air incident was one of four crashes near Ketchikan in the summer of 2019, all but one of which were deadly. And it was Taquan Air’s second fatal crash that summer.

Taquan Air did not respond to requests for comment by phone or email on Thursday. The Ketchikan-based air carrier has since resumed flying both cargo and passengers in the southern panhandle.

“Obviously 2019 was a tough year for floatplanes, there’s no way around that,” NTSB’s Clint Johson said. “But, you know, hopefully looking forward, we are going to try and make things a little better, learn from our mistakes as an industry — not as an operator, but as an industry. And hopefully we learn from those mistakes”

Johnson said it’s not clear when the agency’s final report — which will likely determine a probable cause for the crash — will be released.

Correction: A previous version of this story incorrectly stated when the NTSB expects to release its final report for the May 2019 Metlakatla crash.